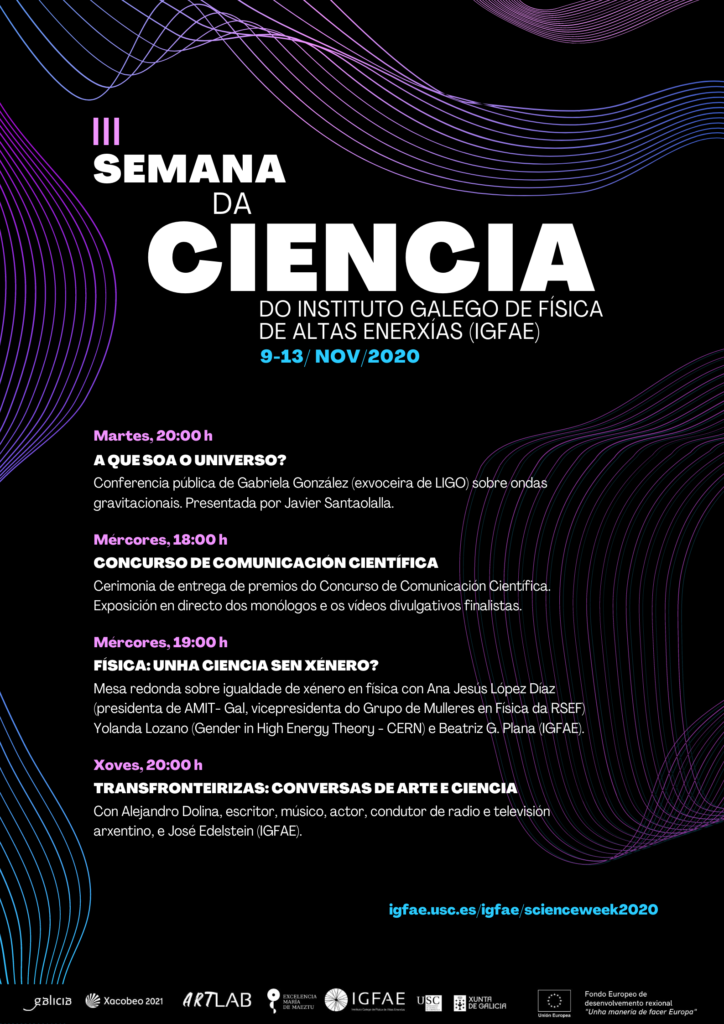 The 3rd Science Week of the Galician Institute of High Energy Physics (IGFAE) kicks off next week with a program of activities for all audiences and a renewed, completely online format, which will be streamed on the IGFAE YouTube channel . As the sanitary emergency prohibits travel and meetings of people, we will reach virtually any person worldwide with the aim of publicizing the Institute’s research work and awakening curiosity about science and physics.

The central theme of the week will take place on Tuesday, November 10 with the traditional public conference by a researcher of recognized international prestige: Gabriela González, expert in gravitational waves and LIGO’s spokesperson when the first detection was announced in 2016. The talk will be presented by the physicist and scientific communicator Javier Santaolalla, who will also moderate the final round of questions. There will also be a day dedicated to gender equality in physics, to the art-science binomial with the “Transfronteirizas” cycle, and the prizes of the III Scientific Communication Contest will be awarded.

Gravitational waves, detected for the first time in 2015, provide us with an unprecedented way of knowing the Universe that does not depend on the light that we used until now. Thanks to extremely precise interferometers, we can “listen” the most violent and spectacular collisions of objects like black holes and neutron stars billions of light-years away, which crinkle space-time by their extreme gravity. What have we discovered with gravitational waves and what discoveries will the planned space detectors bring us in the future? In this conference, former LIGO spokeperson, Gabriela González, will take us on a journey through this new and exciting way of looking at the Cosmos, presented by physicist, popularizer and youtuber Javier Santaolalla.

Resolution and delivery of awards of the IGFAE Scientific Communication Contest, which will feature a exhibition of the selected works and intervention by the authors.

Debate: Physics: a science without gender?

The science system in Spain and in the world does not enjoy full equality in the participation of women and men. The data show inequality between women and men in different dimensions and fields. In Physics, the lack of female presence begins in undergraduate studies, in which female students represent around 30%, and as one progresses in the research career the situation worsens, even more depending on the specialization, as in Theoretical Physics .

In this debate, three experts on gender equality will put on the table some data and initiatives that are being carried out to reverse this situation: Ana Jesús López Díaz (president of AMIT-Gal, vice president of the Group of Women in Physics of RSEF) Yolanda Lozano (Gender in High Energy Theory – CERN) and Beatriz G. Plana (IGFAE).

The Argentine writer, musician, actor, radio host, Alejandro Dolina, will participate in the fifth dialogue of the cycle organized by the IGFAE, whose objective is to explore the art-science binomial with personalities from the cultural and artistic fields. The meeting will be moderated by IGFAE researcher José Edelstein.

This activity is co-financed by the FEDER Galicia 2014-2020 Operational Program.