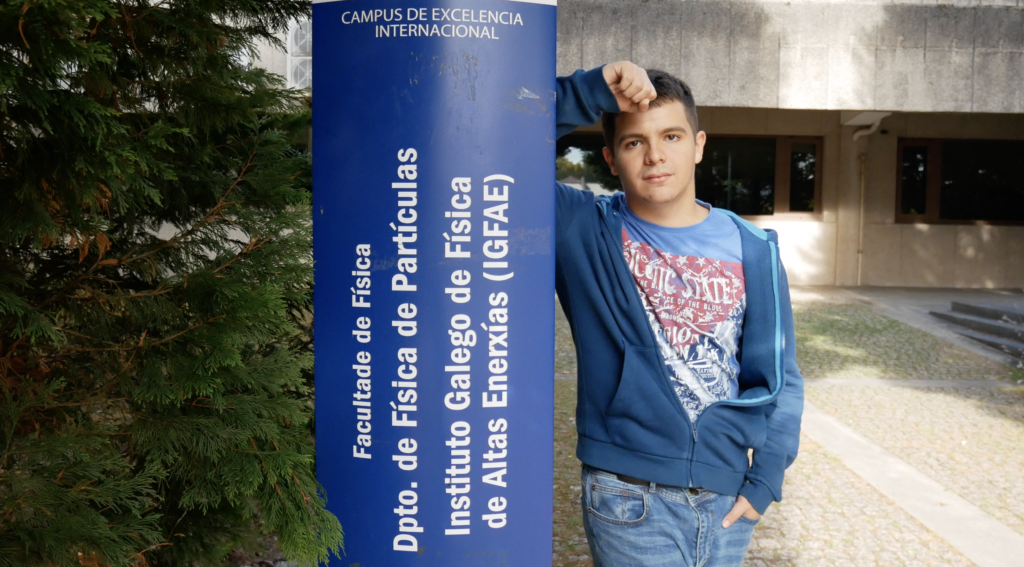 23 SepÁlvaro Martínez: “The IGFAE allowed me to know more about neural networks”

This summer, the Galician Institute of High Enerxies (IGFAE) has opened its doors for the first time to students so that they have the opportunity to start researching with a summer fellowship. One of the ten selected is Álvaro Martínez, a young salamantino who landed in Santiago de Compostela to continue investigating neural networks.

Martinez’s interest in physics began in 4th of ESO, when he coincided with a teacher who aroused his curiosity. From that moment he discovered that this branch of knowledge would become a tool that would allow him to get closer to reality. “As a child, I wanted to be an architect, but thanks to her I can understand the world around me,” he says. Particle physics was his preferred option since high school.

“Some phenomena deceive you because you have a preconceived idea”

Álvaro Martínez is a student who discovers physics in details that other people often ignore. “I find it in everyday life: in a rainbow, for example. When you understand how it happened you see it differently, ”he explains. He does not stop questioning what he sees: “There are some phenomena that deceive you because you have a preconceived idea, but then you analyze the equations and everything changes. It is something that happens with the pen and the weight: there are people who do not know that in a vacuum they fall at the same speed.

Albert Einstein is one of the main references of this student, but also Niels Bohr. There are many authors who outline their trajectory. However, physicist David J. Griffiths is particularly fond of him. “There were certain teachers who didn’t like their books because they made physics too easy.”

From the Scientific Campus to the IGFAE summer scholarships

It is not the first time Álvaro has arrived at the IGFAE. After finishing high school, he participated in “Looking for the most energetic particles in the universe”, the project of the institute and the USC in the Scientific Summer Campus of the FECYT (Spanish Foundation for Science and Technology). “They explained a lot of things about the Standard Model. They were very rigorous with the data, ”he says. Now, four years later, a professor from his university encouraged him to run for one of the scholarships. “When I heard that I was selected, I felt a lot of joy. Santiago is a quiet environment for research, just like Salamanca.”

Supervised by Héctor Álvarez, one of his purposes during his stay was to investigate neural networks,  “At the computer level, I like to know how an in-depth neural network works. The IGFAE – he adds – allowed me to advance in this field ”. His goal was to complement a Master’s Thesis that he took as a reference to progress with this project.

One step away from starting his last year of career and with only 20 years, Álvaro Martínez does not rule out dedicating himself to the world of research. What is not yet clear is his Final Degree Project.