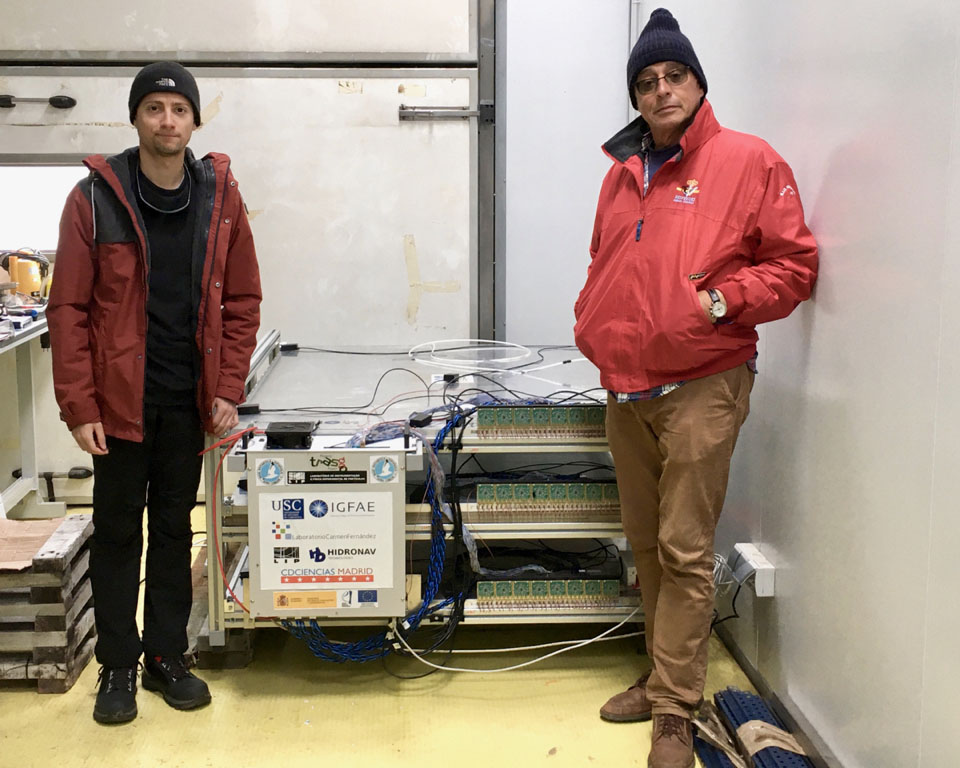 Researchers from the Galician Institute of High Energy Physics (IGFAE) of the USC develop and install a cosmic ray detector at the ORCA observatory of the scientific base “Juan Carlos I”, on Livingston Island in Antarctica. This device, already in operation, will accurately measure electrons and muons to study solar activity and the conditions of the Earth’s atmosphere.

Much progress has been made in understanding the origin and nature of cosmic rays since Austrian physicist Victor Hess discovered them in 1912 flying in a hot air balloon at 5,300 m. While we know that almost all of these particles are hydrogen nuclei and of all the elements of the periodic table, the causes for which they reach energies far superior to those achieved by the most powerful accelerators are not entirely known. The same occurs when determining its origin; it is practically impossible, except for the most energetic particles. There are also low energy cosmic rays coming from the Sun, which is the so called solar wind. Its intensity increases with solar activity and its effects, in the form of a magnetic storm, on communications and global positioning systems such as GPS and other electronic devices can be disastrous. Therefore, it is essential to improve the early detection techniques of these events to prevent their impact as much as possible.

For this purpose, researchers of the Galician Institute of High Energy Physics (IGFAE) of the University of Santiago (USC) developed a cosmic ray detector that has finally been installed in the scientific base “Juan Carlos I”, located in the Livingston Island of Antarctica. After its transfer to the “Hespérides” Oceanographic Research Vessel, the team completed the commissioning of TRISTAN last December as part of the Antarctic Observatory of Cosmic Rays (ORCA). The detector will collect data until the arrival of the southern summer in March to analyze solar activity and the effect of the Earth’s magnetic field on the propagation of cosmic rays.

Measurements from the frozen continent

The Antarctic expedition began at the beginning of November 2019 when the IGFAE researcher and professor of the USC, Juan A. Garzón, and the PhD student, Damián García Castro, left for Cartagena to mount the TRISTAN detector aboard the “Hesperides”. Prof. Garzón accompanied the detector throughout the journey in order to monitor its operation. Throughout it, TRISTAN took data from a particularly interesting region where the Earth’s magnetic shield is slightly weaker and has not yet been studied in detail at the Earth’s Surface level: the so-called South Atlantic Anomaly.

Once on Livingston Island and the “Juan Carlos I” base set up for research puroposes, the TRISTAN detector was put into operation last week of December as part of the ORCA observatory, along with others two detectors developed by the University of Alcalá (UAH), project coordinating center.

TRISTAN (TRASGO for Antarctic Investigation) is a TRASGO type detector that, as a main feature, identify muons and electrons, the secondary particles caused by the interaction of cosmic rays with the Earth’s atmosphere, through a software analysis. It is also able to determine the arrival time, with an accuracy greater than one nanosecond -‒one billionth of a second‒ and the direction of incidence of up to about 20 particles produced in the same interaction. This way some of the properties, direction and energy of the primary cosmic ray could be accessed indirectly.

Since 2014, in the LabCAF laboratory of the Faculty of Physics of the USC, another TRASGO type detector has been installed and taking data, but with higher performance: TRAGALDABAS (TRAsGo for the AnaLysis of the nuclear matter Decay, the Atmosphere, the earth B-Field And the Solar activity). “The joint analysis of the data taken simultaneously by both detectors, given its directional capacity and the great distance between them ‒around 13,000 km‒ offers a unique opportunity to significantly improve the results that each of the detectors can offer separately, in particular those related to the possible early detection of magnetic storms,” explains the IGFAE researcher. The measurements with both devices will be studied together with the observations of URAGAN ‒muon detector located at the MEPhI Institute in Moscow‒ to correlate all data sets. In the development of TRISTAN, Laboratory of Instrumentation and Experimental Particle Physics (LIP) in Coimbra, where the detector was built, and the company Hidronav Technologies in Vigo, which redesigned and improved part of the electronics, were inv