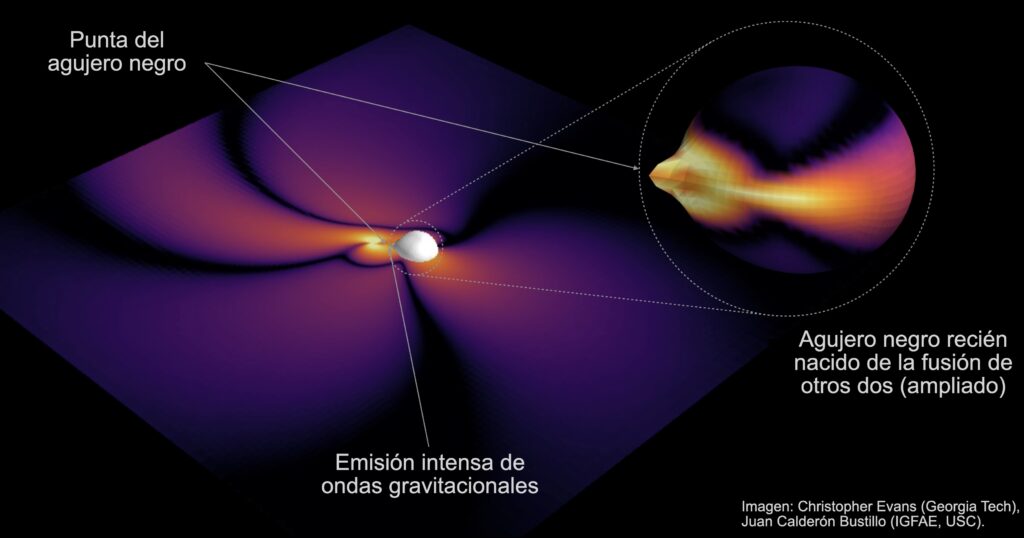 A team of astronomers led by Juan Calderón Bustillo, new gravitational wave researcher at the Instituto Galego de Física de Altas Enerxías (IGFAE), reveals that when two black holes collide and merge, the remnant black hole emits gravitational waves, similar to a lighthouse, that inform us about its shape. Today the study has been published in Communications Physics from Nature journal.

Black holes are one the most fascinating objects in the Universe. At their surface, known as the ‘event horizon’, gravity is so strong that not even light can escape from them. Usually, black holes are quiet, silent creatures that swallow anything getting too close to them; however, when two black holes collide and merge together, they produce one of the most catastrophic events in Universe: in a fraction of a second, a highly-deformed black hole is born and releases tremendous amounts of energy as it settles to its final form. This phenomenon gives astronomers a unique chance to observe rapidly changing black holes and explore gravity in its most extreme form.

Although colliding black holes do not produce light, astronomers can observe the detected gravitational waves—ripples in the fabric of space and time—that bounce off them. Scientists speculate that, after a collision, the behavior of the remnant black hole is key to understanding gravity and should be encoded in the emitted gravitational waves.

In the article published in Communications Physics (Nature) today, led by Juan Calderón Bustillo, ‘la Caixa Junior Leader – Marie Curie Fellow’ at the IGFAE in collaboration with members of the Georgia Institute of Technology (Atlanta, USA), the team reveals how gravitational waves encode the shape of merging black holes as they settle to their final form.

Graduate student and co-author Christopher Evans from the Georgia Institute of Technology says: ‘We performed simulations of black-hole collisions using supercomputers and then compared the rapidly changing shape of the remnant black hole to the gravitational waves it emits. We discovered that these signals are far richer and more complex than commonly thought, allowing us to learn more about the vastly changing shape of the final black hole’.

The gravitational waves from colliding black holes are very simple signals known as ‘chirps’. As the two black holes approach each other, they emit a signal of increasing frequency and amplitude that indicates the speed and radius of the orbit. According to Juan Calderón Bustillo, ‘the pitch and amplitude of the signal increases as the two black holes approach faster and faster. After the collision, the final remnant black hole emits a signal with a constant pitch and decaying amplitude—like the sound of a bell being struck’. This principle is consistent with all gravitational-wave observations so far, when studying the collision from the top. However, the study found something completely different happens if the collision is observed from the ‘equator’ of the final black hole.

A: The stages of a black hole merger. First, both black holes orbit each other, slowly approaching, during the inspiral stage. Second the two black holes merge, forming a distorted black hole. Finally, the black hole reaches its final form. B: Frequency of the gravitational-wave signals observed from the top of the collision (leftmost) and from various positions on its equator (rest) as a function of time. The first signal shows the typical “chirping” signal, in which the frequency raises as a function of time. The other three show that, after the collision (at t=0) the frequency drops and rises again, producing a second “chirp”. Credit: C. Evans, J. Calderón Bustillo

Complex signals depending on the black hole’s shape

When black holes are observed from their equator, the team found that the final black hole emits a more complex signal, with a pitch that goes up and down a few times before it dies. In other words, the black hole actually chirps several times. The scientist discovered that this is related to the shape of the final black hole, which acts like a kind of gravitational-wave lighthouse. When the two original, ‘parent’ black holes are of different sizes, the final black hole initially looks like a chestnut, with a cusp on one side and a wider, smoother back on the other. It turns out that the black hole emits more intense gravitational waves through its most curved regions, which are those surrounding its cusp. This is because the remnant black hole is also spinning and its cusp and back repeatedly point to all observers, producing multiple chirps.

Detail of the shape of the remnant black hole after a black hole collision, with a ‘chestnut shape’. Regions of strong gravitational-wave emission (in yellow) cluster near its cusp. This black hole spins making the cusp point to all observers around it. Credit: C. Evans, J. Calderón Bustillo

Co-author Prof. Pablo Laguna, former chair of the School of Physics at Georgia Tech and now Professor at University of Texas at Austin, pointed out ‘while a relation between the gravitational waves and the behavior of the final black hole has been long conjectured, our study provides the first explicit example of this kind of relation’.

“Last year, the Event Horizon Telescope obtained the first image of a black hole, known as M87. However, it is a black hole that is rather at rest and does not undergo significant changes. In the future, gravitational waves detector could allow us to understand how newborn black holes behave while undergoing rapid and violent changes. This would allow Einstein’s theory of gravity to be tested in unprecedented detail, ”concludes Calderón.

The IGFAE is a joint center of the University of Santiago (USC) and the Xunta de Galicia, accredited as “María de Maeztu” Unit of Excellence (the only center in Galicia with this distinction) and as Singular Research Center of Galicia.