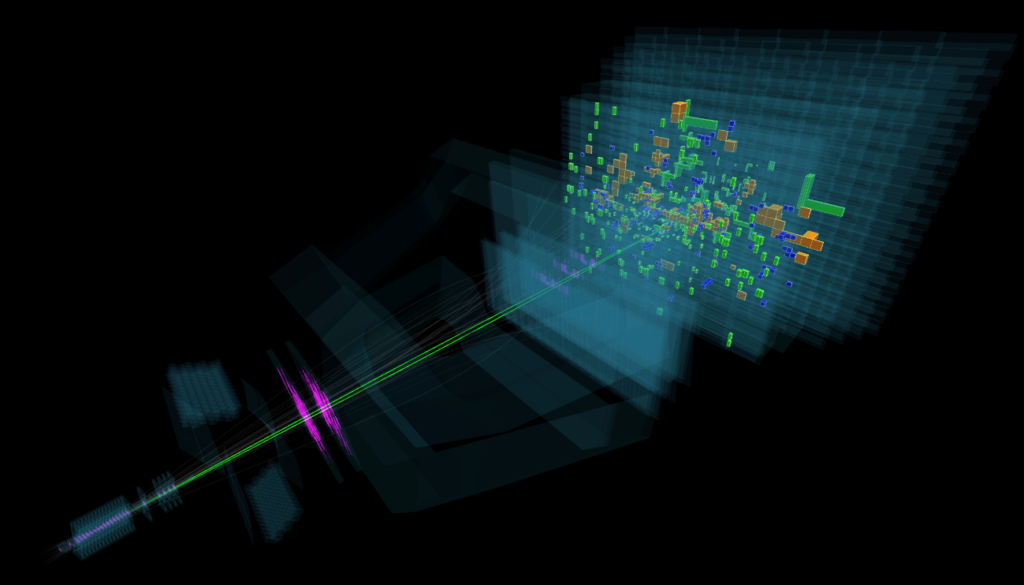 The Instituto Galego de Física de Altas Enerxías (IGFAE) participates in two new measurements of the LHCb collaboration, the most accurate to date and compatible with the predictions of the Standard Model. The results are published in Physical Review Letters and Physical Review D

The Standard Model of particle physics is the most accurate theory describing the properties and interactions of matter. However, it does not include some well-known phenomena such as gravitation or dark matter. The goal of many particle physics experiments is to identify cracks that indicate how to go beyond this theory. One of the main tasks of the LHCb experiment at CERN’s Large Hadron Collider is to detect and measure extremely rare decays of particles produced in very high-energy proton collisions. One such event is the decay of the strange B meson ‒made up of a strange quark and a bottom antiquark‒ into two muons, heavy variants of the electron. In this case, rare means that, according to the Standard Model, out of every billion strange B mesons only three decay in this way. Therefore, very large amounts of data are needed to measure the decay accurately. Numerous proposals to extend the Standard Model, in contrast, predict different values for these rare decay rates.

In two new papers published in the journals Physical Review Letters and Physical Review D, the LHCb collaboration, of which the IGFAE (joint center of the USC and the Xunta de Galicia), is a member, reports the most accurate measurement to date of the rare B meson decay rate. These results, in which IGFAE postdoctoral researcher Titus Mombächer participated, are so significant that they have also been highlighted as “Editors’ Suggestion” in both journals.

The team also explored decays of the strange B meson and the neutral B meson ‒formed by a down quark and a bottom antiquark‒ , even rarer according to the Standard Model, without finding them (an expected result because more data are needed). Thus, these papers underpin the theory with enormous precision and restrict its possible extensions.

Researchers from Germany, England, Italy, the Netherlands, Germany, Italy, and Switzerland participated in this analysis, based on data collected between 2011 and 2018. Titus Mombächer, currently a researcher at IGFAE, made his contributions while working in Dortmund. He explains: “My specific contribution was mainly in the evaluation of processes that could be confused with decays of the B meson and the statistical procedures to evaluate the final result. That is, to determine the decay probabilities, as well as the upper exclusion limits for those decays that we did not observe clearly”.

The search for B meson decays has been repeated many times over the years as the LHCb accumulated data, since the more data we have, the more accurate the new measurement can be. IGFAE researchers Diego Martinez and Xabier Cid worked with the first data collected in 2011 and participated in the first evidence of the B meson decay in 2012.

“The LHC starts up again this year after a technical shutdown to improve its sensitivity and we will be able to accumulate data faster and with better techniques than ever before,” explains Titus. “With the new data we will be able, on the one hand, to inspect more closely whether there is a discrepancy between the decay probabilities predicted in the Standard Model and the measurements. On the other hand, I plan to investigate other properties of the decay of the strange B meson into two muons, which will provide additional information about the physical processes that make this decay happen. In other words, I will not only study how often this decay happens, but also how,” says Titus.

Image: illustration of a real event detected in the LHCb experiment of a proton-proton collision and subsequent decay of a B meson into two muons. Credit: CERN.