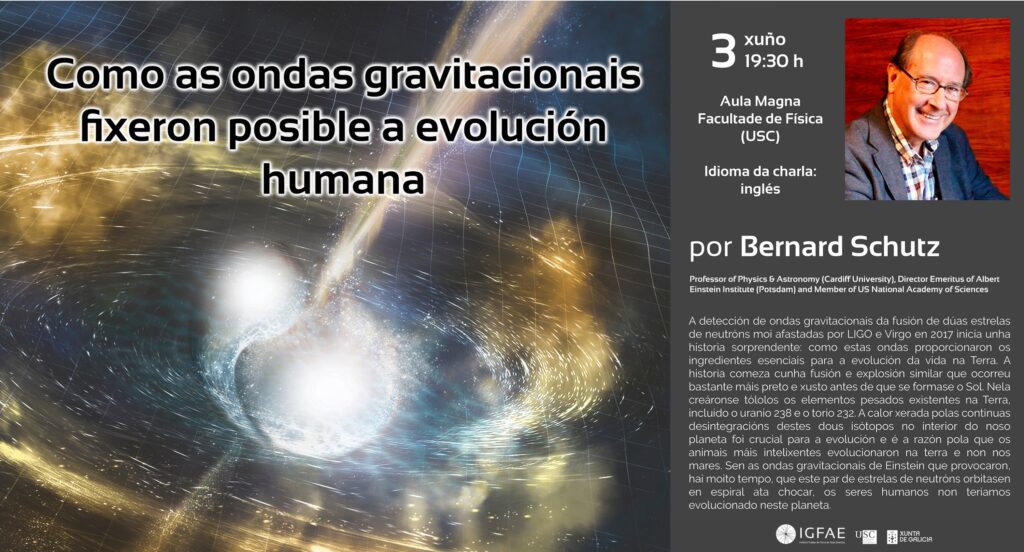 Within the framework of the “9th Iberian gravitational Waves Meeting” (IGWM2019) organized by the Galician Institute of High Energy Physics (IGFAE) in June 3 – 5 in Santiago de Compostela, the Director Emeritus of the Max-Planck Institute for Gravitational Physics – Albert Einstein Institute and professor at the University of Cardiff, Bernard F. Schutz, will give a public talk next Monday, June 3, in the Aula Magna of the Faculty of Physics of the USC at 19:30 h.

The detection by LIGO and Virgo in 2017 of gravitational waves from the very distant merger of two neutron stars has opened up an amazing story, of how Einstein’s gravitational waves actually provided essential ingredients for the evolution of life on Earth. The story begins with a similar merger and explosion that happened rather nearby, just before the Sun formed, and which created all the heavy elements found on Earth, including uranium-238 and thorium-232. The heat generated by the continuing decay of these two isotopes deep inside Earth has been crucial for evolution and is the reason that the most intelligent animals have evolved on land and not in the seas. Without Einstein’s gravitational waves, caused those two long-ago neutron stars to spiral together and collide, we humans would not have evolved on this planet.

The IGW2019 is an international conference set up yearly by different groups around the Iberian Peninsula with interests in Gravitational Waves. The target is to bring together researchers working in the field, including both theoretical and experimental. Another target aims at keeping track of the main developments achieved since the last meeting within the context of the Iberian GW community, in instrumentation, data analysis and theory.