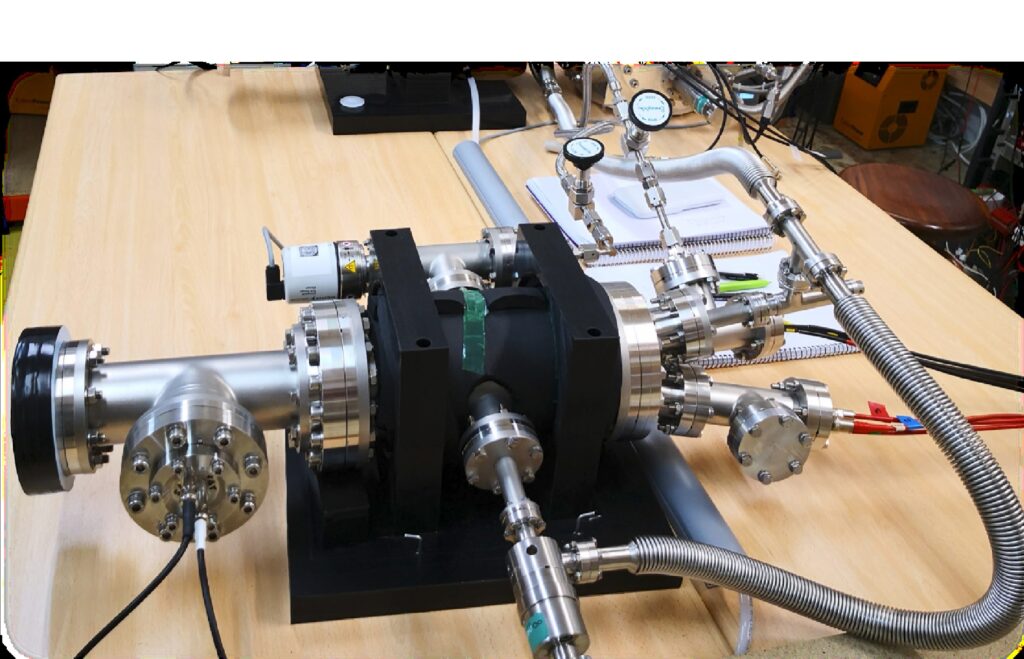 A team from the Instituto Galego de Física de Altas Enerxías (IGFAE) is working on the development of a new detection technique for the DUNE experiment, the world’s most sophisticated neutrino experiment, located between the PIP-II particle accelerator at Fermilab and the underground laboratory in Sanford (USA). Among DUNE’s scientific goals is to observe, with unprecedented precision, how neutrinos change identity or ‘flavour’ as they move, which could help explain the observed asymmetry between matter and antimatter in our universe.

Neutrinos are extremely fast ghosts of the subatomic world. Because their mass is so small, and they have no electric charge ‒hence neutrinos‒ they hardly interact with other particles. In fact, they are so light and weakly interacting that the world we live in is highly transparent to them. They come in three types ‒electron, muon and tauon‒ and as they travel through space they mutate in identity (‘flavour’, in the jargon of the field) according to the difference in mass between them. Determining the properties of neutrinos directly is also very difficult, but there are indirect methods to determine their nature and elusive behavior that may be key to answering one of the big questions in physics today: why is there more matter than antimatter in the universe?

To contribute to this goal, ND-GAr is born, a neutrino detector in whose design an IGFAE team led by researcher Diego González-Díaz is participating. ND-GAr will be installed in the coming years in one of the largest neutrino experiments ever built, DUNE (Deep Underground Neutrino Experiment) at the Fermi National Laboratory near Chicago. Fermilab’s PIP-II accelerator will fire protons accelerated to nearly the speed of light at a target, creating the world’s most powerful neutrino beam to date. Near the neutrino source will be the ‘Near Detector’, where the ND-GAr will be installed, and 1,300 kilometres away another detector, the ‘Far Detector’, will receive them. During this journey more than a kilometre underground, neutrinos change their properties, and the aim of ND-GAr is to help determine, with the highest precision to date, how many neutrinos are converted into antineutrinos during the journey, and vice versa. The scientific community believes that, if we can characterise these tiny neutrino oscillations well enough, we can solve the mystery by which matter rules over antimatter in our Universe. 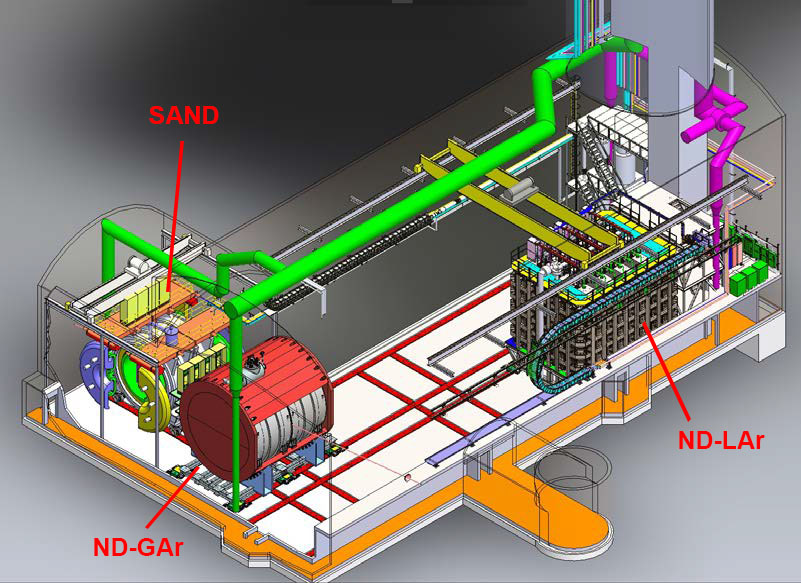 Schematic of the Near Detector to be installed in DUNE and its various subcomponents. In red, the TPC chamber being designed by the IGFAE. Credit: DUNE collaboration.

The key could lie in the different behavior of neutrinos and antineutrinos towards the oscillation phenomenon which, in a vacuum, is characterised by the so-called “charge-parity (CP) violation angle (phase) in the lepton sector”. Once this different behavior between neutrinos and antineutrinos has been confirmed and, especially, quantified, it becomes possible to establish theoretical relations between analogous phenomena for other fundamental particles/antiparticles of the Standard Model of particle physics. In particular, their interactions and, ultimately, the way in which matter and antimatter were created and destroyed during the origin of the universe, with one of the two asymmetrically prevailing.

On the trail of neutrinos with TPC cameras

ND-GAr is a time projection chamber (TPC), a type of detector that combines electric and magnetic fields with argon-rich gases in the case of DUNE, thus allowing to reconstruct in 3D the trajectory of the particles produced in neutrino interactions. The IGFAE team is designing a method to read out the initial scintillation produced when the neutrino beam interacts with the gas in the detector (commonly called the ‘T0’ signal). This will make it possible to suppress events that are not associated with the neutrino beam, as well as to improve the reconstruction of the emerging charged particles. In particular, it will improve the estimation of the energy and scattering angle of neutrons and gamma rays produced in ‘neutral current’ interactions, a type of neutrino interaction that has particularly complicated reconstruction characteristics and is therefore much less studied to date. 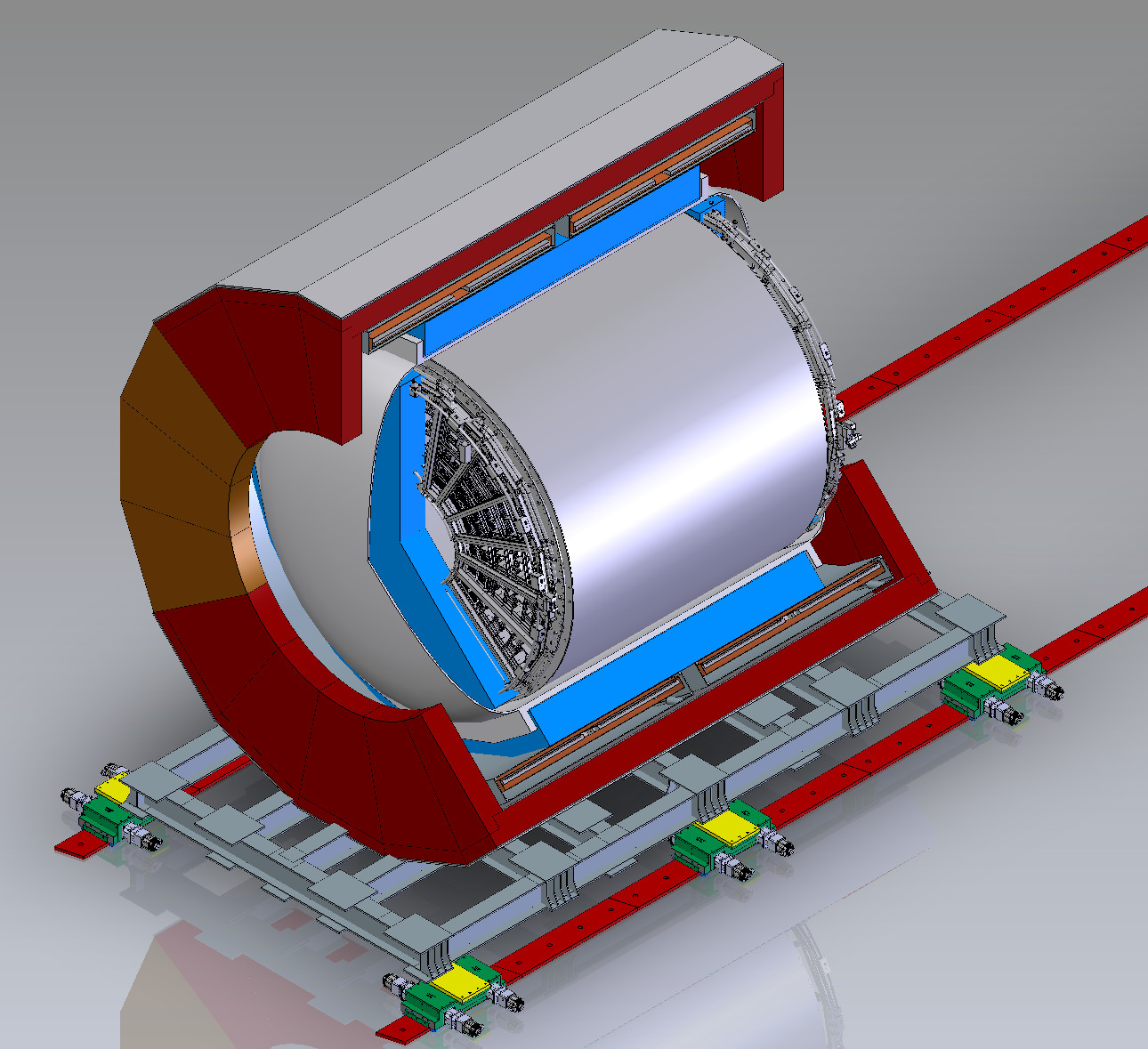 “A particularly interesting aspect of this project is that we are now beginning to understand the potential of the detector to reconstruct particles produced in conjunction with the neutrino beam and predicted in different extensions of the Standard Model,” says Diego González-Díaz, coordinator of the project. “To achieve this, it is essential to be able to obtain the time of the interaction, and gas-phase detection represents significant improvements compared to other existing techniques”.

“We still need to better understand the technical aspects, but the experimental demonstration of the existence of a strongly scintillating gas mixture at 10 atmospheres of pressure, together with the operational stability of a mini ND-GAr built at the IGFAE, has marked a before and after. The persistent work of Pablo Amedo and Sara Leardini, PhD students at the IGFAE, together with technical support from David José Fernández and David González Caamaño (IGFAE technician) over the last few months has been incredible”.

Currently, the full response of the TPC is being evaluated to determine more quantitatively the impact of the light signal produced by the neutrinos interacting with the gas in the different physics channels. This work is carried out with computer simulations, using Geant4 software and data from experimental measurements led by IGFAE postdoctoral researcher Ángela Saa. “This work will also allow us to establish how to optimize the optical readout, in particular which sensors to use and how to configure them. Our goal is, by the end of the year, to implement at the IGFAE the selected technology for light detection in a mini-ND-GAr already of medium size (20 liters). We are still a long way from fully understanding the new possibilities that are opening up to us, but the scientific-technological horizon is fascinating,” says Diego Gónzalez-Díaz.

DUNE is an international consortium made up of more than 1,000 scientists, 200 institutions and 30 countries, in which the IGFAE is contributing with a team composed by Ángela Saa, Pablo Amedo, Sara Leardini, Miguel Morales, David José Fernández, Alberto Sánchez and David González. In addition to numerous international collaborators, in Spain it has the support of researchers from the Instituto de Física Corpuscular (IFIC), the Centro de Investigaciones Energéticas, Medioambientales y Tecnológicas (CIEMAT) and the University of Granada.

This project is funded by the IGNITE* program of the IGFAE and the H2020 program through the AIDAinnova project for the development and transfer of new particle detector technologies in Europe over the next 4 years and, specifically, for the optimization of new-generation pressurized TPCs with optical readout.