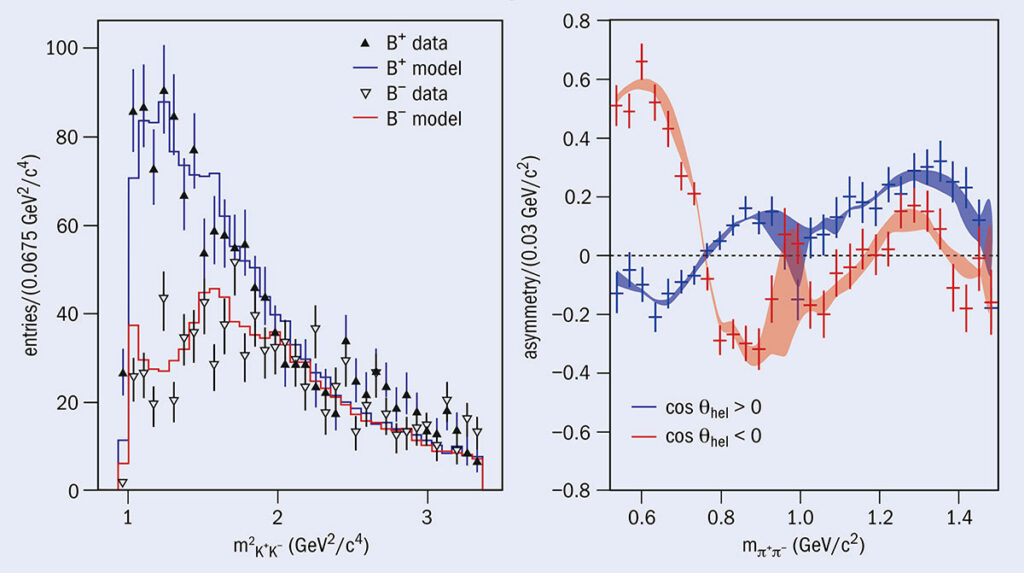 IGFAE researcher Jeremy Peter Dalseno participates in the latest analysis of the LHCb collaboration that helps to clarify the opposite behavior of certain particles when they become their antiparticle and the discrepancy between matter and antimatter.

The Standard Model of Particle Physics is the theory that best describes the behavior of matter at the microscopic level, whose consistency has been tested with numerous experiments. However, this theory predicts that all visible matter could only produce a single galaxy and does not explain why matter is more abundant than antimatter if both were created equally after the Big Bang. Now, a new analysis of the LHCb collaboration at CERN would clarify the causes of this asymmetry or CP violation.

In 2014, the scientific team of this experiment found that matter and antimatter behaved completely opposite during the process of disintegration of a type of particle in its antiparticle, something totally unexpected. Without a clear explanation, an in-depth analysis of that data was done and revealed new insights into the mechanism by which the strong asymmetry is generated: it is due to interference between the wave functions of quark-antiquark pairs. In addition, this is the first observation of CP violation in spin 2 particles and it is also the highest spin state found to date.

The results do not explain the origins of the abundance of antimatter matter in the universe itself but help to take a step forward by revealing a series of conditions that produce an antagonistic behavior between both. “This analysis provides significant clues of how the CP violation manifests in the Standard Model and motivates further study of the quantum chromodynamic (QCD) processes that govern CP violation,” explains IGFAE researcher Jeremy Peter Dalseno. Jeremy joined IGFAE recently, the only ‘María de Maeztu Unit’ of Excellence in Galicia, through its Global Talent Program created to attract the best talent, and the agreement between the Xunta de Galicia and the ERC researcher Diego Martínez Santos. The analysis included two ERC projects, led by J. Rademaker of the University of Bristol and T. Gershon from Warwick University and it is featured in the July/August 2019 edition of the CERN Courier.

Image: Left: yields of B+ → π+K+K– and B– → π–K–K+ showing a clear asymmetry in the region of phase space dominated by re-scattering effects. Right: the CP asymmetry between B+ → π+π+π– and B– → π–π–π+decays in a region of phase space including the ρ(770)0 and f2(1270), divided according to whether the cosine of the helicity angle is positive (blue) or negative (red). (cosθhel  > 0 if, in the rest frame of the B, the pion with the same charge as the B has higher momentum than its oppositely charged counterpart.) The bands indicate the full spread of the isobar, K-matrix and quasi-model-independent models used to describe the decays. Credit: CERN Courier.