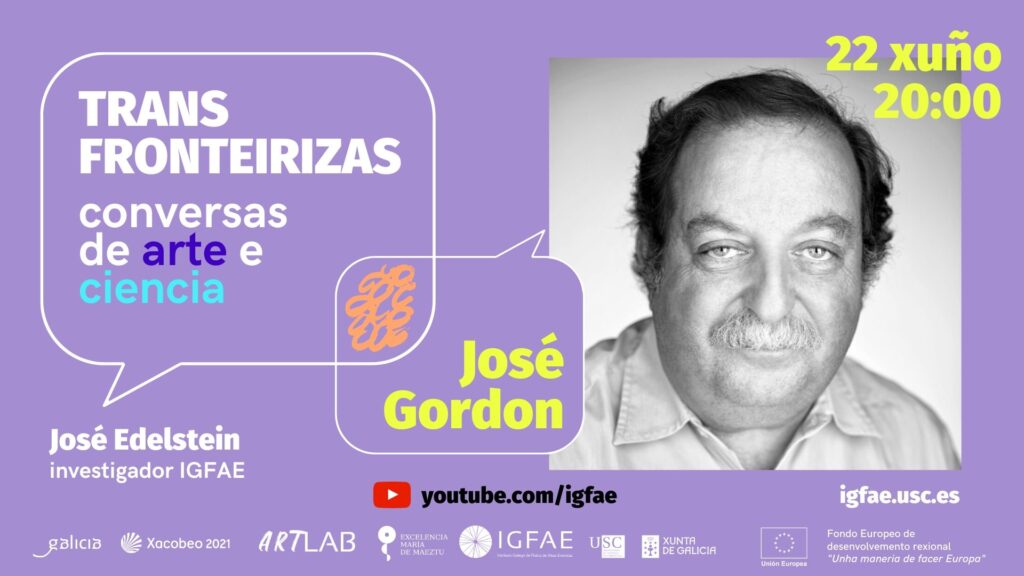 José “Pepe” Gordon, one of the most popular figures in scientific dissemination and culture in Mexico, will participate in the second dialogue of the talk series organized by the Galician Institute of High Energy Physics (IGFAE) whose objective is to explore the art-science binomial with personalities from the cultural and artistic fields. Moderated by IGFAE researcher José Edelstein, the chat will be broadcasted in Youtube next Monday, June 22, at 8:00 p.m.

“Transfronteirizas, Conversas de Arte e Ciencia” is pleased to continue with her monthly appointment with a guest from across the ocean: José “Pepe” Gordon. The writer, screenwriter and tv presenter of the scientific outreach program T La oveja eléctrica  joins this series of virtual interviews to reflect on the connections between physics, science and culture, after the participation of Rosa Montero. The public will be able to follow and participate live in this dialogue, again led by the IGFAE researcher and USC professor, José Edelstein, on the IGFAE YouTube channel next Monday 22nd at 8:00 p.m. (Spain).

José Gordon is a screenwriter, novelist, essay writer, and translator. He conducts and directs La oveja eléctrica, a scientific outreach program broadcast by Canal 22 in Mexico, which received the National Journalism Award for its interviews with leading international researchers and the participation of Nobel laureates. He is the creator of the children’s animation capsules Imaginantes, awarded at the New York Film Festival. He is the author, among other books, of the Inconcebible universo. Sueños de unidad, an essay on the communicating vessels between science and poetry. Currently, he leads La Hora Nacional together with Marisol Gasé and writes and directs a series of television capsules called Colisionador de Ideas about new concepts to move to a society of imagination and knowledge. His most recent book Gato encerrado. Fronteras del cerebro, illustrated by Sebastián Ilabaca, is a bold editorial proposal in a pop-up format, which invites the reader’s creativity to awaken.

Organized by the Galician Institute of High Energy Physics (IGFAE) of the University of Santiago de Compostela (USC) and the Xunta de Galicia, “Transfronteirizas, Conversas de Arte e Ciencia” is a cycle of virtual dialogues broadcast on YouTube in which figures from the cultural field are invited to explore the intersections between art and science with our research staff, seeking an interdisciplinary approach. This initiative is included into the ArtLAB program, which aims to build bridges and promote participation between society and the research community through different artistic expressions.