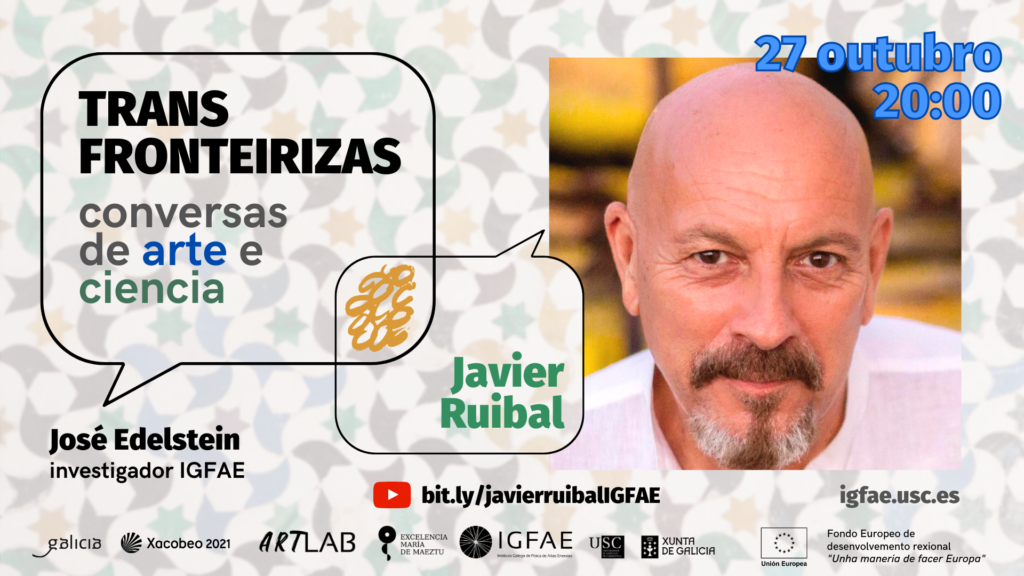 20 OctQuantum Physics and Astronomy with the musician Javier Ruibal in the next "Transfronteirizas, conversas de arte e Ciencia"

The singer-songwriter and guitarist Javier Ruibal will participate on Tuesday, October 27 at 8:00 p.m. in the fourth virtual dialogue of the cycle organized by the Galician Institute of High Energy Physics (IGFAE). Moderated by IGFAE researcher José Edelstein, the chat will be broadcasted on the IGFAE YouTube channel.
An original and unclassifiable composer like Javier Ruibal could not be absent from our most multidisciplinary initiative, born during confinement to achieve meeting spaces between art and science, even if these were virtual. This singer and guitarist, eternal explorer of the beauty of world music and winner of the Goya Prize this year, will be the fourth guest of “Transfronteirizas”. He will talk with the IGFAE researcher and USC professor José Edelstein about the embrace between Quantum Physics and Astronomy with poetics, sensitive material from his latest album, written in these months of lockdown. The public will be able to follow and participate live in this dialogue, which will include the presentation of these two songs, on the IGFAE YouTube channel on Tuesday 27 at 20:00 (Spain).
Javier Ruibal (El Puerto de Santamaría, Cádiz) is the author of music and lyrics of his songs. Composer, arranger, guitarist, and singer, his 35-year career has earned him recognitions such as the Medalla de Andalucía de las Artes 2007, the Premio Nacional de las Músicas Actuales 2017, and the Goya 2020 Award for the best original song. He has 13 albums published in Spain and other Spanish and non-Spanish speaking countries and has composed music for other artists, as well as for film, television, dance and theater. It has remained from its beginnings in the search for interdisciplinary, multicultural music with a planetary vocation, crossing with respect and success different sounds. Starting from those of her maternal Andalusia, he goes through disparate and colorful harmonies. From the Maghreb to Brazil, or from India to the Caribbean, on the back of a very personal flamenco style that has notably influenced what has come to be called “new flamenco”. From jazz and flamenco to classics and singer-songwriters, he creates his own music and poetry for which he is considered a respected and praised “musician of musicians” by critics and the artistic scene.

Art, science and society
Organized by the Galician Institute of High Energy Physics (IGFAE) of the University of Santiago de Compostela (USC) and the Xunta de Galicia, “Transfronteirizas, conversas de arte e Ciencia” is a cycle of virtual dialogues broadcast on YouTube in which we invite figures from the cultural field to explore the intersections between art and science with our research staff, seeking an interdisciplinary approach. Rosa Montero, José “Pepe” Gordon and Ricardo Gurriarán have already participated in this initiative that is part of the ArtLAB program, whose objective is to build bridges and promote participation between society and the research community through different artistic expressions.
More information: