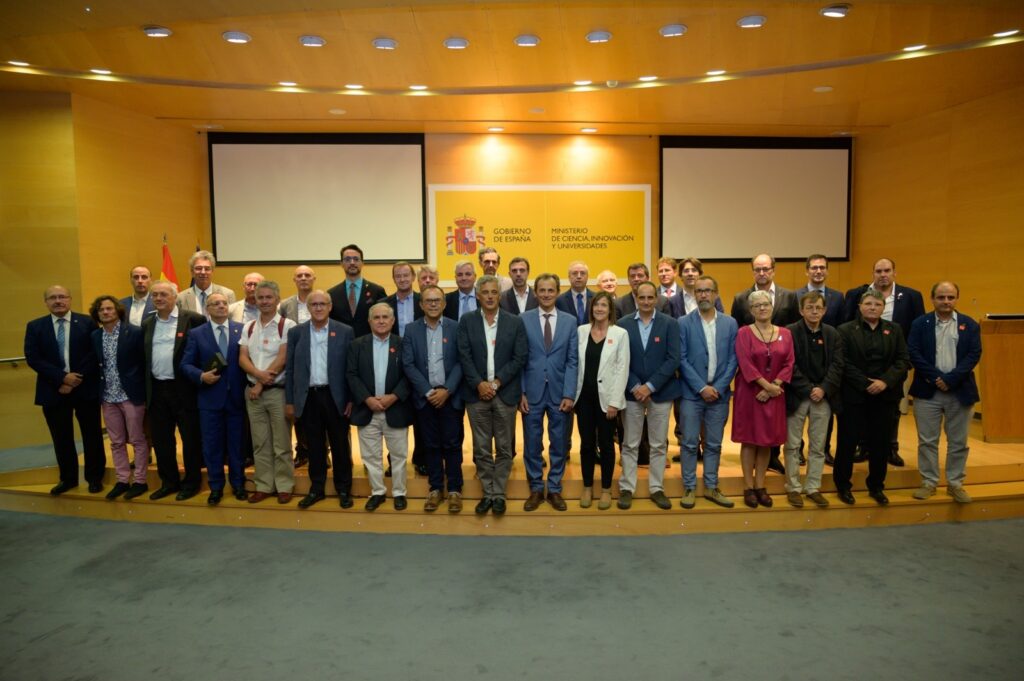 Yesterday took place a meeting between the Ministry of Science, Innovation and Universities, the Severo Ochoa and Maria de Maeztu centres and units of excellence and high-officials and counselors of 15 autonomous communities. The programme of excellence “Severo Ochoa – Maria de Maeztu” identifies and promotes the excellence in scientific research. Its objective is to give recognition to the research institutions at the forefront of their fields, and to boost their impact, international scientific leadership and competitivity.

The event took place at the Ministry, and was co-presided by the Minister Pedro Duque and by Luis Serrano, president of the SOMM alliance, the director of the Spanish State Agency of Research, Enrique Playán, and the first vice president of SOMMa, Maria Blasco.

The minister of Science, Innovation and Universities, Pedro Duque, stressed “the firm support of the Government to the Severo Ochoa and Maria de Maeztu programme of excellence”, highlighting “the importance of the Autonomous Communities being able to host such centres, which would be to the benefit of their science and innovation systems.” The minister has declared, moreover, that “the level of the selection requirements will remain as stringent as it currently is, reason why the objective is that more excellent research institutions appear, something that requires of the support of the various governments.”

As declared Luis Serrano, “this meeting is symptomatic of a constructive and positive stance with regard to research in Spain. The support and interest of the autonomous communities for research is essential for Spain having expectations of becoming a country with a truly knowledge-based economy. The Severo Ochoa and Maria de Maeztu programme is a powerful lever of which autonomous communities can make use to strengthen their research institutions.”

The meeting in the Ministry had as object to emphasise the impact of the Severo Ochoa – Maria de Maeztu programme, its benefits for the consolidation of research of excellence, and its potential to help to sustain and to become a springboard for the research poles of autonomous communities. Six centres and units of research, among them the Galician Institute for High Energy Physics (IGFAE), have exposed their path towards obtaining the award and the impact that the prize has had. A round of questions and answers at the end of the act allowed the autonomous communities to learn how they can benefit from the programme.

During the event, the Director of IGFAE Carlos Salgado presented the case of this joint centre of the University of Santiago de Compostela (USC) and the Xunta de Galicia, distinguished as a María de Maeztu unit of excellence in 2017. This is the only accreditation in Galicia, and is allowing the institute to carry out an important strengthening of its scientific base, establishing new alliances with large international facilities such as the LIGO collaboration in gravitational waves. The main action for this strengthening is an ambitious recruiting program named IGFAE Global Talent that in just one year allowed to open new lines of research and attract external funding in highly competitive calls like Ramón y Cajal or La Caixa. A strengthening of the technical units of high-performance computing, management and communication, as well as a more dynamic implementation of the direction of the centre are also the reasons of these successes. On the other hand, thanks to the María of Maeztu distinction, IGFAE is joining the network of centres promoted by the Conselleria de Education of the Xunta de Galicia with a joint operation model, unique in the Galician system.