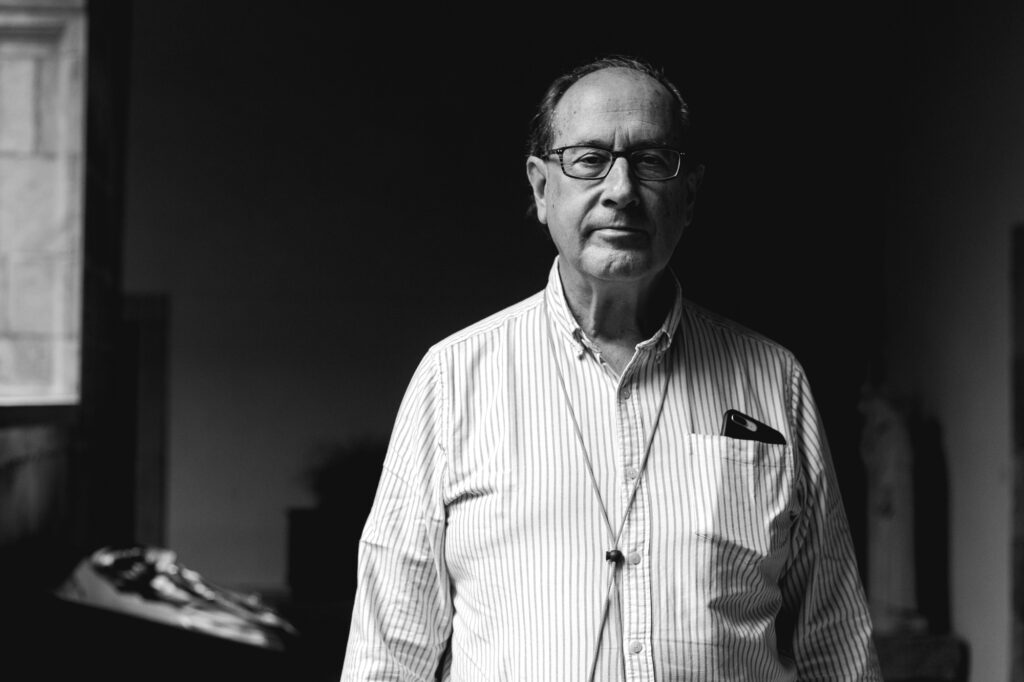 10 JunBernard Schutz: “The evolution and development of a more complex social intelligence in terrestrial animals and, ultimately, in human beings, would not have occurred without gravitational waves”

Gravitational wave expert Bernard Schutz was one of the invited speakers to the 9th Iberian Gravitational Wave Meeting, a conference organized by the Galician Institute of High Energy Physics (IGFAE) last week in Santiago de Compostela. Besides sharing with the gravitational wave researchers the scientific and technological advances of this new way of “listening” to the Universe, he gave an informative talk at the USC about the crucial role that these spatial-temporal oscillations, predicted by Einstein in 1916, play in human evolution.

“The first detection of gravitational waves in 2015 was fantastic; however, the one that occurred on August 17, 2017 had much greater ramification and implications”, says Schutz, Professor at the University of Cardiff and with more than 40 years of experience dedicated to the study of these vibrations. “By observing the fusion of these two neutron stars we understood that half of the elements of the periodic table, the heaviest ones, are produced in this type of explosions.” It was an exceptional find that the international media picked up eagerly, although the headlines highlighted almost exclusively the definitive evidence of the origin of one of our most precious metals: gold.

It was already known that the stars are the ovens that “cook” the chemical elements in their interior through nucleosynthesis – the process by which hydrogen atoms fuse into heavier ones – but there was not enough evidence of how elements heavier than iron formed. More energy is needed for the atomic nuclei to fuse and this is where the neutron stars come into play: about 1.5 times as massive as the Sun and with the same diameter as the city of Santiago, they are so compact and dense that the energy emitted when they collide, after being forced to spiral together by gravitational waves, is colossal. As a result of this explosion, two elements that were unnoticed at that time by the general public, although not for Schutz, were born: uranium and thorium. Recently, together with his colleague Tsvi Piran of the Hebrew University of Jerusalem, he has been studying the role of these isotopes in the evolution of life on Earth. As he explained in front of an initially skeptical audience at the USC Faculty of Physics last Monday, uranium 238 and thorium 232 keep the Earth warm by the energy released when they decay; and this heat, after a long chain of events, has made it possible for us to enjoy a more developed intelligence today that has brought us here.

The Earth was formed from a disk of dust and gas that collapsed by its own gravity about 4.5 billion years ago. That cloud, from which the rest of the bodies of the Solar System would also were born, was composed of chemical elements expelled by generations of stars before the Sun, among which is the uranium and thorium that exist today in nature. Distributed through the terrestrial interior, they release energy as they decay gradually, helping to maintain the outer core of the Earth as liquid iron. This in turn allows us to have a magnetic field that protects us from the solar wind and, ultimately, maintains the atmosphere that made the development of life possible. Mars, on the contrary, even sharing many of the characteristics of our planet, is uninhabitable because it lost its magnetic field.

“Apart from the existence of the magnetosphere, uranium and thorium also cause the movement of tectonic plates.” Schutz maintains “that the heat released produces the convection of the terrestrial mantle, which is rocky, and over millions of years causes the movement of the continents.” And he continues: “two key processes happen: the first is that carbon is recycled. The carbon dioxide is trapped in the shells of animals buried in the limestone of the soil that, through the movement of subduction, emerges again through the volcanoes, maintaining the atmospheric CO2 that the plants need to make the photosynthesis and us to breathe.”

The second consequence of the continental movement is that it forced the animals to evolve differently. “This is where we found the greatest contrast: while in the oceans the animals experienced more modest environmental challenges, on the moving continents the climate could change dramatically, and there were other threats such as volcanoes and earthquakes that continually forced animals to adapt and evolve.” Prudent, but convinced, Schutz concludes that “this is the reason why we find a more developed social intelligence in terrestrial animals. Nature has challenged us much more than animals that evolved exclusively in the oceans.”

This retrospective journey towards our origins began with the gravitational waves produced by two neutron stars and observed by the LIGO and Virgo interferometers in 2017. Although such detections are almost commonplace today, it was only in 2015 that they were found for the first time, putting an end to a scientific and technological journey that goes back to 1916 when Einstein predicted them in his General Relativity. Schutz recognizes that during his career there were complicated periods, but he never doubted the possibility of detecting gravitational waves. “It took time and funding to develop the technology,” he confesses. In fact, about ten years after finishing his PhD (supervised by Kip Thorne, a recipient of the 2017 Nobel Prize in Physics for the discovery of gravitational waves) Schutz was asked to help with the proposal for a new detector in Scotland. “As a theoretical physicist, I had to convince the funding agencies why we should build it, and that completely caught my imagination. Gravitational waves are pure gravity and fundamental physics and they carry information about what happens in the Universe. That’s why they are so fascinating”, he enthuses.

Schutz’s interest in gravitational waves led him to publish an article in Nature in 1986 for which he was recognized with the Eddington Medal in January. “I showed how gravitational waves could be used to determine the expansion rate of the Universe. In Astronomy it is almost impossible to determine distances because, for example, you observe a star and you do not know whether its brightness is due to its proximity or because, although it is further away, it is intrinsically more luminous. Thanks to gravitational waves, we could know how far away the system that produces them is. If we can then measure the speed the system is moving away from us, for example by measuring the redshift of the spectrum of the galaxy where the event happened, then we can measure what we call the Hubble-Lemàitre constant, the ratio of speed to distance that governs the expansion of the universe. Even today astronomers don’t agree on the value of the expansion ratio, and so we hope we can help settle this controversy”.

Looking ahead to know the origins

Work like Schutz’s has used the first detections by LIGO and Virgo, which are just the beginning of our quest to listen to and understand the nature of gravitational waves. Looking toward the future, there are plans for ground-based detectors ten times bigger than the ones we have today, and for a detector in space: the mission called LISA (Laser Interferometer Space Antenna), of the European Space Agency (ESA), will observe waves in frequency ranges where LIGO and Virgo are not sensitive. “In space we can avoid the gravitational noise of the Earth itself and build a detector as large as we want to find the weakest waves,” says Schutz, involved in the design of this mission. Scheduled for launch in 2034, LISA is composed by three spacecraft in an Earth-trailing heliocentric orbit about 50 million km from Earth with an inter-spacecraft separation of 2.5 million km. Its sensitivity will be best around 10-3 Hz, a frequency in which the Universe is rich in gravitational waves. “LISA will be almost overwhelmed with signals, and our concern will be to separate overlapping signals from each other, rather than to find them underneath the detector noise.” LISA will allow us to make that giant leap necessary to continue researching our origins by peeking at the first stars and primordial black holes, just when they began to form. “When we look at them so far back in time, we will be unraveling even further the story of the origins of human beings.”