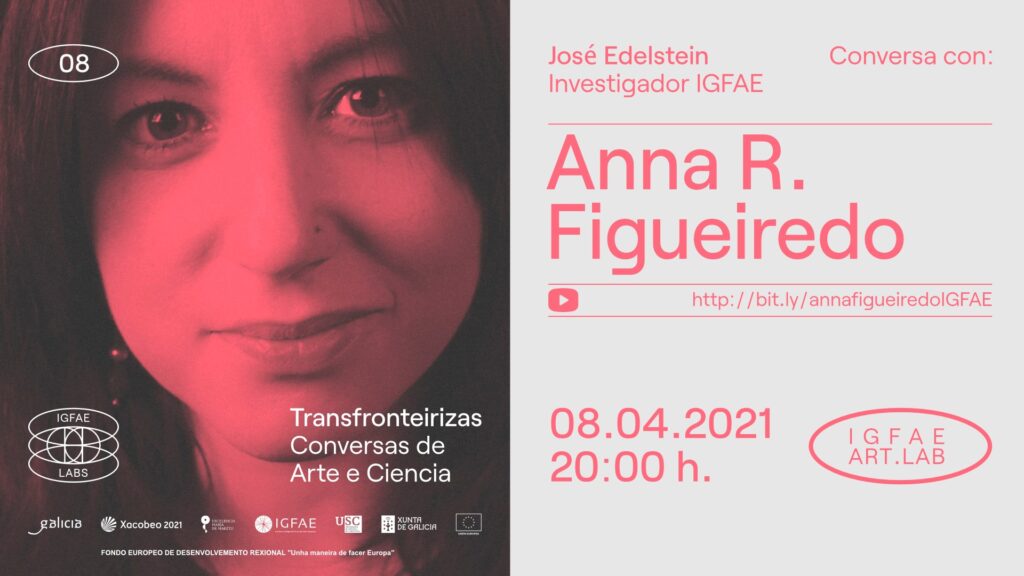 05 AprThe physics of words: Anna R. Figueiredo will participate in the cycle “Transfronteirizas, talks of art and science” of the IGFAE this Thursday

The vice-president of the Association of Writers in Galician (AELG) and Ph.D. in Physics, Anna R. Figueiredo will participate next Thursday, April 8, in the eighth virtual conversation of the cycle of the Galician Institute of High Energy Physics (IGFAE). Moderated by IGFAE researcher and USC professor José Edelstein, the meeting aims to build bridges and promote participation between society and the research community through different artistic expressions: on this occasion, literature and science.The talk will be broadcasted on IGFAE’s youtube channel.

Anna R Figueiredo (Ourense, 1979) has a degree in Physics from USC specializing in particle physics. She has a PhD from the Sheffield University, working on the study of how the morphology at the interface of polymeric semiconductor materials influences electronic transmission in field effect transistors. She currently teaches scientific-technological subjects at the I.E.S As Barxas (Moaña), while teaches creative writing courses. Since 2020 she is the vice-president of the Association of Writers in Galician. Her first course with the Escola de Letras of the publishing house Galaxia, in collaboration with the Diputación de Pontevedra, will begin in September 2021 and will have the title “Write the first novel”.

She has participated in research dissemination programs at the school such as Researchers in Residence and written opinion articles for newspapers such as La Voz de Galicia or Nós Diario from the defense of the interdisciplinarity of the arts and sciences and the integrative point of view that a student is not “neither science, nor letters”. A firm defender of the role of women in science and of the need for equal opportunities and speeches that reach all the students, she has participated in outreach talks on science and/or feminism in different cultural and educational centers. In the literary field, her debut novel, Os bicos feridos (Galaxia), won the award of the first edition of the Concello de Redondela Viaductos de Novela award. In it, its protagonist, Olivia, observes the world from precepts studied in physics and mathematics with total naturalness, establishing limits that tend to infinity, conditions of continuity, singularities or sufficient and necessary conditions to survive. From her writing she tries to transcribe a real world in a literary environment through the precept of the beauty of physics and mathematics and its universal capacity to explain and contain both reality and fiction.

Organized by the Galician Institute of High Energy Physics (IGFAE) of the University of Santiago de Compostela (USC) and the Xunta de Galicia, “Transfronteirizas, conversas de arte e Ciencia” is a cycle of virtual dialogues broadcast on YouTube in which figures from the cultural field are invited to explores the intersections between art and science with our research staff, seeking an interdisciplinary approach. The objective is to build bridges and promote participation between society and the research community through different artistic expressions.

Credit of the image in the poster: Diego Seixo.