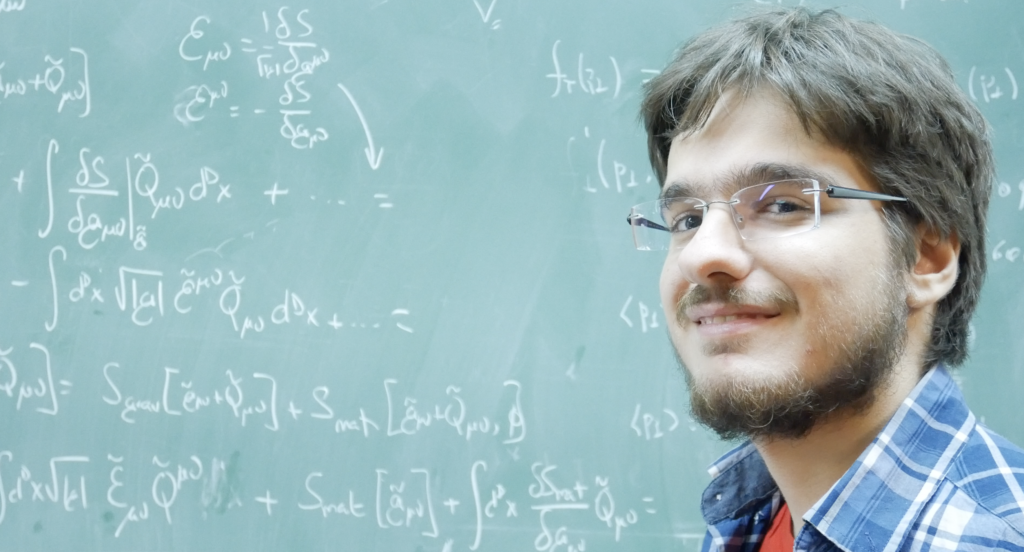 23 SepAndrés Curiel: “At IGFAE, I learned to use new computer tools”

Andrés Curiel has been one of the young beneficiaries of one of the ten summer fellowships destined for research that the IGFAE convened. When he knew he was admitted, he was surprised because he considered he lacked experience. However, Curiel Barroso worked in a field as promising as gravitational waves with the help of Gareth Davies and Jaime Álvarez, and supervised Thomas Dent. Thanks to this researcher IGFAE joined the LIGO scientific collaboration, which uses two of the three major detectors of this type of disturbances worldwide.

Curiel Barroso was never clear that he would end up dedicating his career in the field of physics to high school. At this stage he decided to embark on a long-term study plan: “I discovered that physics brought me challenges with which I spent time flying”. Meanwhile, he was amazed by Enrico Fermi. “He was the architect of the nuclear era. In fact, he inaugurated a school of nuclear physics in Italy, although in that country there were still no great advances in particle physics, ”he says. He also drank from researchers like Richard Feynman or David J. Griffiths, who believes that his talent for making physics easy is a virtue.

“Instead of seeing cables and components, I see electrons that power devices”

Andrés Curiel considers that the most attractive aspect of physics is his ability to explain the fundamental facts of nature with precise and illuminating language. He is passionate about abstract concepts that describe aspects of reality that are not perceived by the naked eye, such as the interaction between particles. He feels so much devotion to physics that he finds it everywhere and reflects on it through aspects of everyday life, such as the movement of a spoon. “In electrical installations, instead of seeing cables and electronic components I start thinking about electrons, which with their movement are able to power those devices,” he adds.

The researcher occupies much of his free time in advancing in the branches that are treated superficially in the classes. In third career he began to be interested in extracurricular activities. “I was lucky to visit the ATLAS detector at CERN, where the Higgs Boson was discovered that resulted in a Nobel Prize, an experience that encouraged me to continue undertaking activities of this kind,” he explains.

“Santiago de Compostela is a place conducive to research”

The bulletin board of the faculty was the bridge between Andrés Curiel and the IGFAE. Thanks to this news, the student moved from Salamanca, where he studied, to Santiago de Compostela. In spite of everything, Andrés admits to adapt to the changes with ease and considers this city like a propitious place for the investigation.

Andrés Curiel’s project goes to decipher messages. This is defined by the student in a simple way. “For now we characterize the new information carried by gravitational waves and relate it to details that we already know, and that come from the same sources,” he clarifies.

The future physicist believes that the IGFAE helped him use computer tools, something that, from his point of view, does not work as much in the degree. When talking about his future, Andrés Curiel prefers to think that he has open options: “My intention is to maintain a high average grade and undertake more extracurricular experiences like this.”