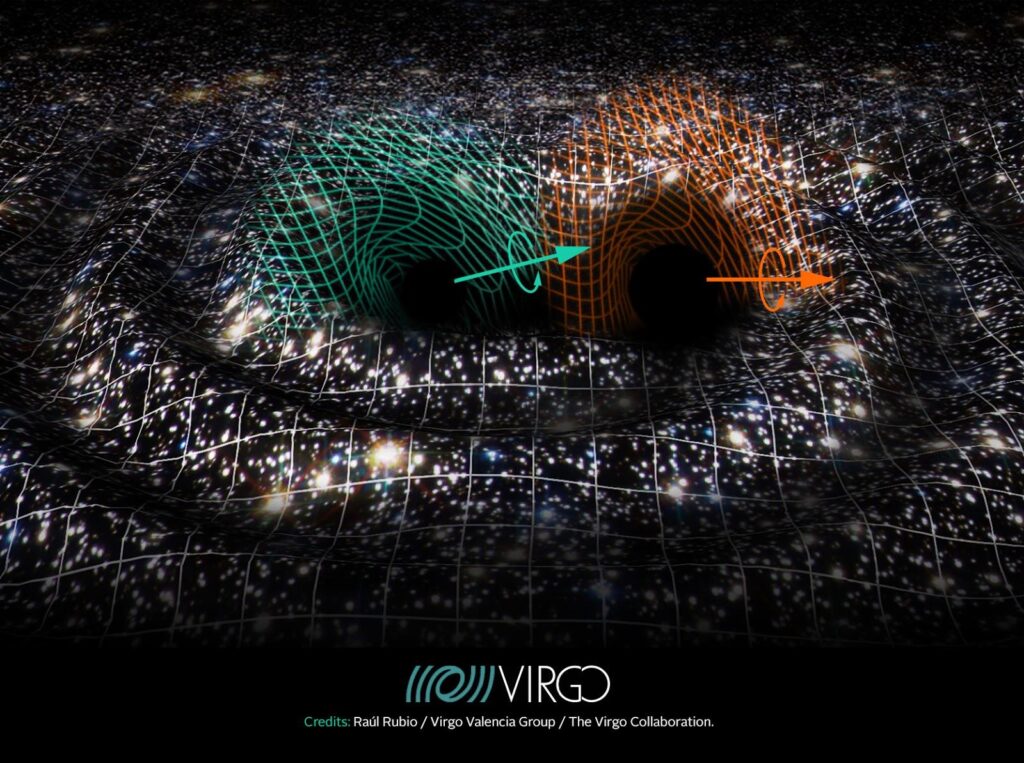 02 SepThe most massive merging of two black holes ever detected

LIGO and Virgo have announced the detection of an extraordinarily massive merging binary system: two black holes of 66 and 85 solar masses, which generated a final black hole of around 142 solar masses. The remnant black hole is the most massive ever detected with gravitational waves. It lies in a range of mass within which a black hole has never before been observed, either via gravitational waves or electromagnetic observations, and may help to explain the formation of supermassive black holes. Furthermore, the two initial black holes, if they arose from stars, lie in a mass range within which their presence is considered, in theory, impossible, and may therefore help to improve our understanding of the final stages of the lives of massive stars.

The scientists of the international collaborations running the Advanced Virgo detector at the European Gravitational Observatory (EGO) in Italy and the two Advanced LIGOs, in the US, have announced the detection of a black hole of around 142 solar masses, which is the final result of the merger of two black holes of 66 and 85 solar masses. Both the primary components and the remnant lie in a range of mass never observed before, either via gravitational waves or with electromagnetic observations. The final black hole is the most massive ever detected with gravitational waves. The gravitational-wave event was detected by the three interferometers of the global network on the 21st of May, 2019. The signal (named GW190521) has been analysed by scientists, who have estimated the distance of the source to be about 17 billion light years from Earth. Two scientific papers reporting the discovery and its astrophysical implications have been published today on Physical Review Letters and Astrophysical Journal Letters respectively.

The breaking of the mass record of the Virgo and LIGO observational runs is just one of the several special features that make the detection of this exceptional merger an unprecedented discovery. A crucial aspect, which particularly drew the attention of astrophysicists, is that the remnant belongs to the class of so-called ‘intermediate-mass black holes’ (from a hundred up to a hundred thousand solar masses). The interest in this black-hole population is linked to one of the most fascinating and challenging puzzles for astrophysicists and cosmologists: the origin of supermassive black holes. These giant monsters, millions to billions of times heavier than the sun and often at the centre of galaxies, may arise from the merger of ‘smaller’ intermediate-mass black holes.

Until today, very few intermediate-mass black hole candidates have been identified through electromagnetic observations alone and the remnant of GW190521 is the first observation of an intermediate-mass black hole via gravitational waves. It is of even greater interest, owing to it being in the range from 100 to 1,000 solar masses, which has represented for many years a sort of “black-hole desert”, because of the paucity of candidate events within this range.

“This detection opens the door to many possible new astrophysical effects”, says Thomas Dent, convener of the gravitational waves program at the Galician Institute for High Energy Physics (IGFAE) and member of the LIGO Scientific Collaboration. “It has already been challenging to interpret the signal as it is at the edge of our technical capability and we may only have a clear idea of how it was formed after even further investigations and future detections to compare with”.

“I am very proud of the great involvement of the Spanish LIGO-Virgo groups in this new event, with all the activity developed over many months, including tasks of great responsibility, and the expectations that this new discovery is generating among scientists from related fields”, points out Alicia Sintes, from the University of the Balearic Islands (UIB) and member of the LIGO Scientific Collaboration. “In particular, Thomas Dent (IGFAE) and the Galician Juan Calderón Bustillo (Chinese University of Hong Kong, former UIB member and about to join the IGFAE as Junior Leader researcher of “ la Caixa ”), have been members of the editorial team of these articles; Sascha Husa and David Keitel, both from the IAC3-UIB have been internal reviewers of the results obtained.”

The components and the dynamics of the merging binary system of GW190521 offer extraordinary astrophysical insights. The heaviest of the two merged black holes is larger than any black hole observed so far by LIGO and Virgo and even the lightest black holes figures is among the more massive of those observed. In particular, the masses of the progenitor black holes challenge the astrophysical models describing the collapse of the heaviest stars, at the end of their lives, into black holes. According to these models, the most massive stars are completely disrupted by the supernova explosion, due to a process called pair instability, and leave behind only gas and cosmic dust. Therefore, astrophysicists would not expect to observe any black hole in the mass range between about 60 and 120 solar masses: exactly the range of mass in which the most massive component of GW190521 lies. Hence, this detection opens new perspectives on the study of massive stars and supernova mechanisms.

“Several scenarios predict the formation of black holes in the so-called pair instability mass gap: they might result from the merger of smaller black holes or from the collision of (multiple) massive stars or even from more exotic processes”, says Michela Mapelli of the University and INFN of Padova, and member of the Virgo Collaboration. “However, it is also possible that we have to revise our present understanding of the final stages of the star’s life and the resulting mass constraints on black-hole formation. Either way, GW190521 is a major contribution to the study of the formation of blackholes.”

In fact, the Virgo and LIGO GW190521 detection highlights the existence of black-hole populations that have never been observed before or are unexpected and, in so doing, raises intriguing new questions about their formation mechanisms. Despite the unusually short duration of the signal, which limits our ability to infer the astrophysical properties of the source, the most advanced analyses and models currently available suggest that the initial black holes had strong spins, that is to say, they were rotating rapidly.

“The signal shows hints of precession, a rotation of the orbital plane produced by spins with large magnitude and particular orientation”, states Tito Dal Canton, CNRS researcher at IJCLab in Orsay, France, and member of the Virgo Collaboration. “The effect is weak and we cannot claim it is definitely present, but if true, it would support the hypothesis that the progenitor black holes arose and lived in a very shaky and crowded cosmic environment, like a dense star cluster or the accretion disk of an active galactic nucleus.”

It has been necessary to combine all the different capacities of the members of our collaborations: the instrumental improvements, the development of numerical models, the data analysis and the astrophysical interpretation. “This event has really pushed us to our limits: the full analysis of this event and its thorough review by collaborations has required a large number of researchers for more than 15 months! It should also be remembered that we do not yet have complete models of these types of signals: while we can describe precession effects reasonably well, black holes in general can also present remarkably eccentric orbits, orbiting in ellipses rather than circles when they are far apart. We are working to include this effect before LIGO and Virgo observe more signals, with the help of the Mare Nostrum supercomputer, one of the fastest computers in Europe”, says Sascha Husa (UIB).

Several different scenarios are still compatible with the shown results and even the hypothesis that the progenitors of the merger might be primordial black holes has not been discarded by scientists. We actually estimate that this merger occurred about 7 billion years ago, a time close to the ancient ages of the Universe.

With respect to previous gravitational-wave detections, the observed GW190521 signal is very short in time and more difficult to analyse. Due to the more complex nature of this signal other more exotic sources have been considered, and these possibilities are described in an accompanying publication. However, these possibilities are disfavoured with respect to the source being a binary black holemerger.

“Due to the low frequency of the GW190521 signal, the “chirping” prior to the collision, characteristic of previous detections, is not so visible in the detectors”, adds José Antonio Font, from the University of Valencia (UV) and member of the Virgo Collaboration. “The chirping can be reduced efficiently due to the precession of the orbital plane, but there are also other situations, perhaps less likely, where the same effect is observed, such as in collisions with significant eccentricity. The joint work carried out by Nicolás Sanchis Gual and Alejandro Torres Forné, from the Virgo group in Valencia, and Juan Calderón Bustillo, supported by numerical simulations and statistical inference, reveals that there could be some confusion regarding the type of system that produced this signal.”

“The collaboration between the Valencian graphic designer Raúl Rubio and the Virgo group in Valencia has made possible the production of diffusion material that illustrates this discovery”, points out Isabel Cordero Carrión, from the UV and member of the Virgo Collaboration.

The Virgo Collaboration is currently composed of approximately 580 members from 109 institutes in 13 different countries, including Belgium, France, Germany, Greece, Hungary, Ireland, Italy, the Netherlands, Poland, Portugal, Spain, Monaco, and Japan. The European Gravitational Observatory (EGO) hosts the Virgo detector near Pisa in Italy and is funded by Centre National de la Recherche Scientifique (CNRS) in France, the Istituto Nazionale di Fisica Nucleare (INFN) in Italy, and Nikhef in the Netherlands. A list of the Virgo Collaboration groups can be found at http://public.virgo-gw.eu/the-virgo-collaboration/. More information is available on the Virgo website at http://www.virgo-gw.eu.

LIGO is funded by the National Science Foundation (NSF) and operated by Caltech and MIT, which conceived of LIGO and led the project. Financial support for the Advanced LIGO project was led by the NSF, with Germany (Max Planck Society), the U.K. (Science and Technology Facilities Council) and Australia (Australian Research Council-OzGrav) making significant commitments and contributions to the project. Approximately 1,300 scientists from around the world participate in the effort through the LIGO Scientific Collaboration, which includes the GEO Collaboration. A list of additional partners is available at https://my.ligo.org/census.php.

The Spanish contribution is funded by the State Research Agency, Ministry of Science, Innovation and Universities, through the AYA and FPN programs, Severo Ochoa and María de Maeztu Excellence programs, European Union funding programs, ERDF funds, European Social Fund, Operative Program ERDF Galicia 2014-2020, Xunta de Galicia, Conselleria de Educacion Universidade e Formacion Profesional, Vice-presidency and Ministry of Innovation, Research and Tourism, Ministry of Education, and Universities of the Balearic Government, Ministry of Innovation, Universities, Science and Digital Society of the Generalitat Valenciana through the PROMETEO projects, the CERCA program of the Generalitat de Catalunya, and they have the support of the Spanish Supercomputing Network (RES).

More material can be found on the following pages:

Among the communication materials prepared by the LIGO and Virgo collaborations, and available on the latest website, are scientific summaries (in several languages, including Spanish), graphics, videos and multimedia material, including an image and a GIF of Raúl Rubio (material mentioned above).