The Pierre Auger Collaboration, in which IGFAE participates leading Spanish participation, presents the most precise measurements to date on the most energetic and enigmatic particles in the Universe that would help clarify their origin.

Ultra-high-energy cosmic rays (UHECRs) are the most energetic particles from outer space in the Universe (up to more than 1020 eV). With our currently available technology, the LHC accelerator would have to be scaled to the size of the orbit of the planet Mercury to reach this energy. Despite being discovered in 1961, how and where they are produced is still unknown. Now, new data from the Pierre Auger Collaboration, in which partipates the Galician Institute of High Energy Physics (IGFAE), joint center of the Universidade de Santiago (USC) and Xunta de Galicia, reveal a new feature in the UHCR energy spectrum and reinforces the hypothesis that their origin is in starbust galaxies or active galactic nuclei (AGNs). The results are published  Physical Review Letters and Physical Review D.

The Pierre Auger Collaboration is a research group of approximately 400 people from 17 countries operating the world’s largest cosmic ray observatory in Malargüe, Mendoza (Argentina). It is made of more than 1,600 surface water-Cherenkov stations covering an area of 3,000 km2, a huge area since the flux of these particles is extremely small -less than one particle per millennium arrives on an area of a square-kilometer. They observe a type of light, Cherenkov radiation, when “showers” of particles or cascades produced by cosmic rays pass through the water. These detectors are overlooked by 27 fluorescence telescopes that capture ultraviolet light caused by cascades as they pass through the atmosphere. Together, they provide measurements of cascade energy and indirect measurements of the primary particle mass. Combining the information on the energy spectrum, mass composition and the observed arrival direction distribution, important constraints on the sources of these extraordinary particles can be derived

In the papers published now, which analyse the 215,000 events collected by the Pierre Auger Observatory so far, a new feature of the UHECR energy spectrum has been identified —a steepening of the curve around 13 x 1018 eV. This smoothing in this intermediate region (figure 1) could be a natural consequence of the energy-dependent mass composition of cosmic rays, changing from light to heavy. The results can be explained with relatively uniformly distributed extragalactic sources of cosmic rays, which accelerate heavier particles to higher energies. These models require an extremely hard spectrum —with more high-energy particles— and sources that are practically constant over time. In this scenario, both requirements do not match observations of nearby light sources in all types of light in the electromagnetic spectrum, from radio waves to gamma rays.

The IGFAE team, led by the professor of the USC Enrique Zas, has participated in the preparation of the article and has led the analysis of cascades or showers of inclined particles, which has been used to establish the so-called “invisible energy”, essential for the precise determination of energy.

Spain has contributed significantly to the Pierre  Auger Collaboration in many different aspects, such as the analysis of inclined showers, the muon content of the showers, the nature of the primary particles, applications of machine learning techniques, the search of neutrinos, multimessenger astronomy, the fluorescence technique and the radio technique. Currently the University of Granada and IGFAE participate in the project, which has led Spanish participation since its origin in the 1990s. 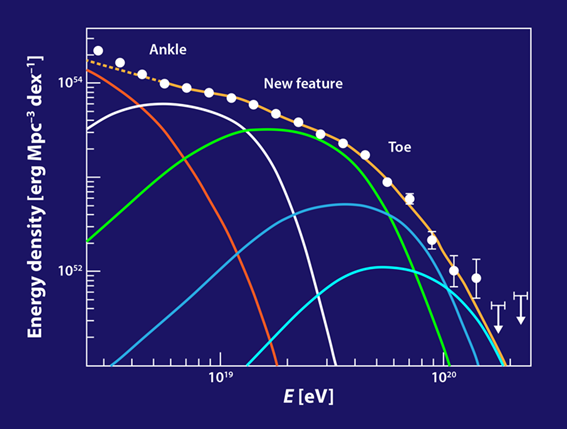 Figure 1. The UHECR spectrum compiled from the latest Auger data is shown here in terms of the energy density. The observations reveal a new feature at 13×1018eV13×1018eV, where the spectrum steepens slightly. This break in the power-law fit occurs between two other breaks: an ankle and a toe. The shape of the spectrum suggests that different nuclei (shown in colors) contribute at different energies. Credit:  APS/Alan  Stonebraker, adapted  from  Phys. Rev. Lett. 125, 121106 (2020).

The Pierre Auger Observatory is currently undergoing a large-scale upgrade by adding scintillation detectors and radio antennas on top of the existing water-Cherenkov detector stations. This will allow the scientists to obtain more information about the UHECR mass composition, extending it to the highest energies where a possible presence of light mass nuclei could open a new window to composition-sensitive searches for sources and studies of cosmic magnetic fields