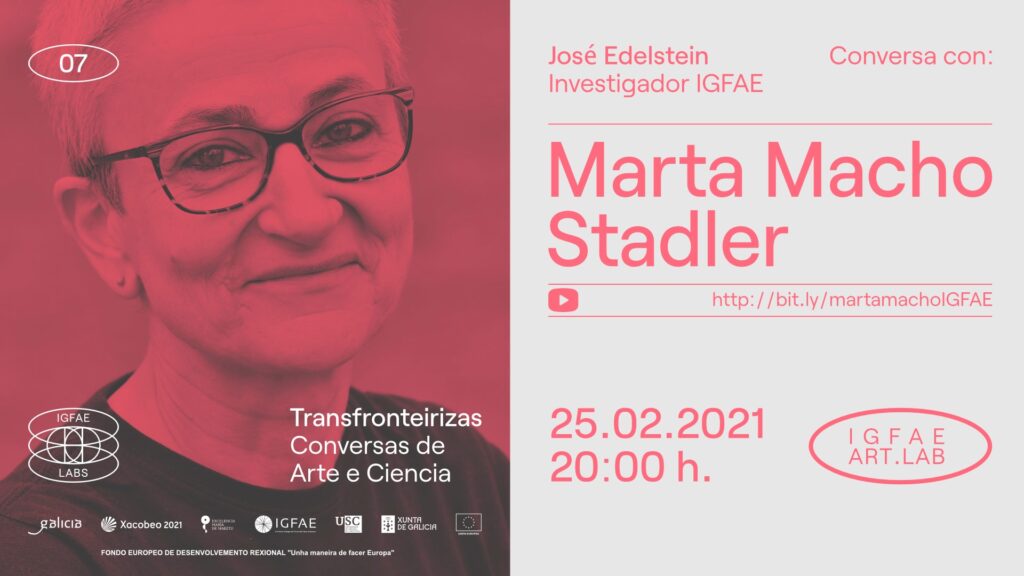 17 FebMathematics, literature and women with Marta Macho Stadler in the next ‘Transfronteirizas, talks about art and science’

The mathematician and scientific communicator will participate on Thursday, February 25, in the seventh dialogue of the virtual cycle organized by the Galician Institute of High Energy Physics (IGFAE). It will be moderated by IGFAE researcher and USC professor José Edelstein at 8:00 p.m. and will be broadcasted on the IGFAE YouTube channel.

After the round table organized on February 11 by the Singular Centers of the USC on the occasion of the International Day of Women and Girls in Science, IGFAE will hold a new dialogue of “Transfronteirizas, talks about art and science” with a researcher nationally recognized and awarded for her work to make women scientists visible and disseminate mathematics: Marta Macho Stadler. PhD in mathematics and professor at the University of the Basque Country-Euskal Herriko Unibertsitatea (UPV/EHU), she is editor of the blog Mujeres con Ciencia of the Chair of Scientific Culture of this same university and responsible for the sections of Literature and Mathematics and Theater and Mathematics in the DivulgaMAT website of the Royal Spanish Mathematical Society. He will talk with IGFAE researcher and theoretical physicist José Edelstein about his concerns about these matters next Thursday, February 25 at 8:00 p.m. (peninsular time) in a virtual meeting that can be followed live on the IGFAE YouTube channel.

Marta Macho Stadler (Bilbao, 1962) is a specialist in topology, a branch of mathematics dedicated to the study of those properties of geometric bodies that remain unchanged by continuous transformations. Interested in the dissemination of science, she has participated for years in various activities in universities, scientific institutions, cultural or teaching centers. She also collaborates in different media, such as the program La mechanica del caracol on Radio Euskadi, The Conversation or the Network of Communicating Scientists of El Periódico in collaboration with the Esteve Foundation.

Among his recognitions, in 2015 he received the Premio igUAldad from the University of Alicante ‘for her actions in defense of equality between women and men and, in particular, for his educational and informative actions in favor of making visible of women scientists not only in the Academy, but also in social progress’. She also received one of the Medals of the Royal Spanish Mathematical Society in its first edition,’ for her work to disseminate mathematics, for her commitment to equality and for building bridges between mathematics teachers at different educational levels. ‘ In 2016, she was awarded the Emakunde ‘Prize for her scientific career aimed at disseminating and promoting the approach of mathematics and scientific knowledge to women, as well as for making visible and vindicating women scientists and their contributions to both the Academy and to social progress.’ Finally, in 2019 she received the appointment of Illustrious of Bilbao’ for her work as a scientific disseminator and for making the role of women in science visible. ‘

Organized by the Galician Institute of High Energy Physics (IGFAE) of the University of Santiago de Compostela (USC) and the Xunta de Galicia, “Transfronteirizas, conversas de arte e Ciencia” is a cycle of virtual dialogues broadcast on YouTube in which figures from the cultural field are invited to explore the intersections between art and science with IGFAE’s researchers, seeking an interdisciplinary approach. The objective is to build bridges and promote participation between society and the research community through different artistic expressions.