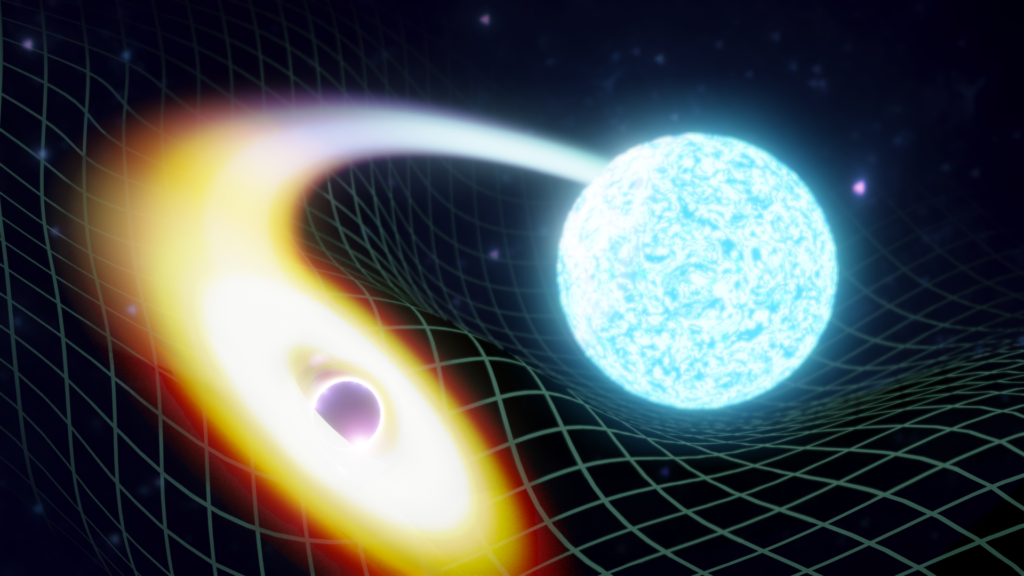 For the first time, researchers have confirmed the detection of a collision between a black hole and a neutron star. In fact, the scientists detected not one but two such events occurring just 10 days apart in January 2020. The extreme events made splashes in space that sent gravitational waves rippling across at least 900 million light-years to reach Earth. In each case, the neutron star was likely swallowed whole by its black hole partner.

Now, in a new study, scientists have announced the detection of gravitational waves from two rare events, each involving the collision of a black hole and a neutron star. The gravitational waves were detected by the National Science Foundation’s (NSF’s) Laser Interferometer Gravitational-Wave Observatory (LIGO) in the United States and by the Virgo detector in Italy. The KAGRA detector in Japan, joined the LIGO-Virgo network in 2020, but was not online during these detections. 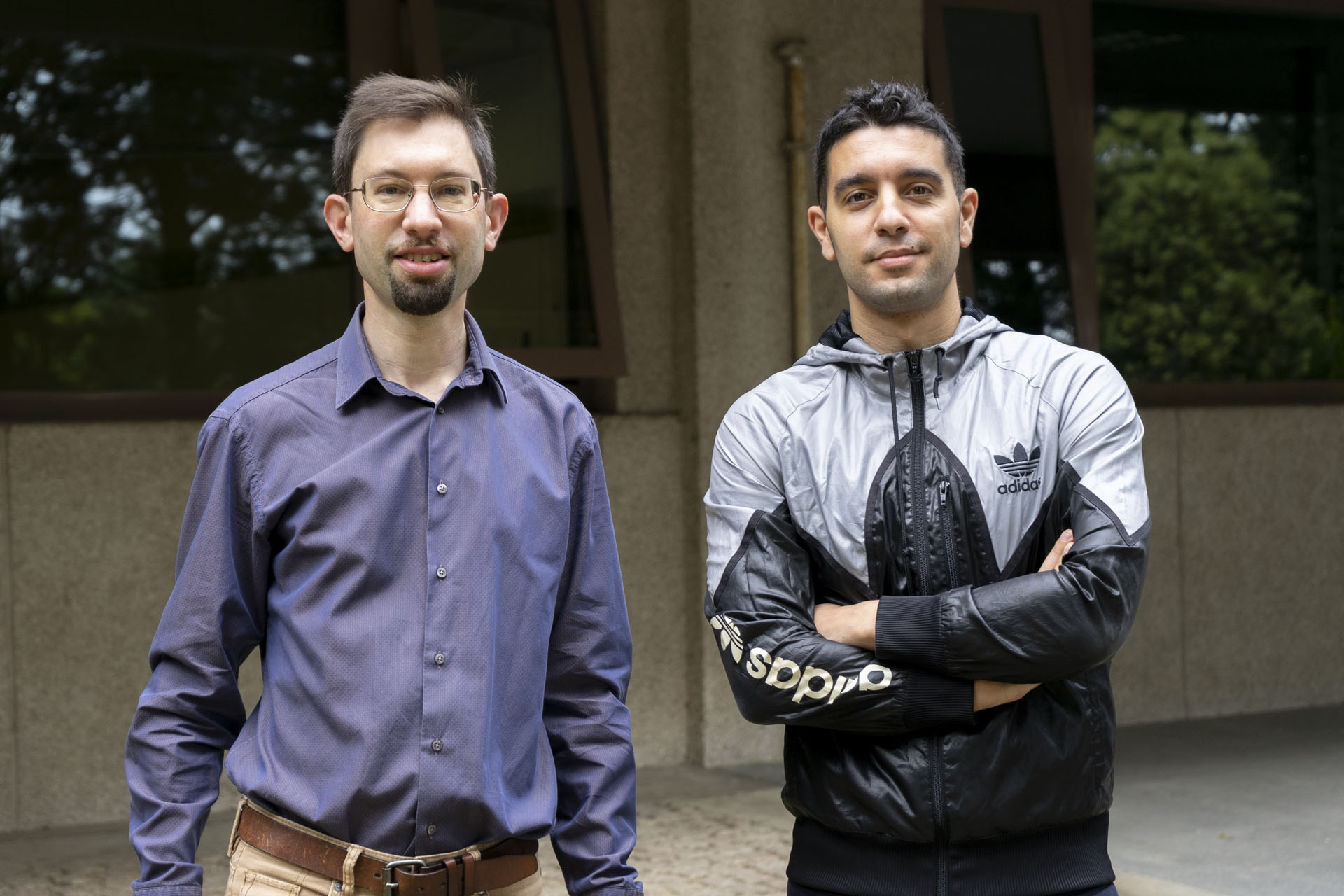 Astronomers have spent decades searching for neutron stars orbiting black holes in the Milky Way, our home galaxy, but have found none so far. “With this new discovery of neutron star- black hole mergers outside our galaxy, we have found the missing type of binary. We can finally begin to understand how many of these systems exist, how often they merge, and why we have not yet seen examples in the Milky Way,” says Astrid Lamberts, a CNRS researcher at Observatoire de la Côte d’Azur, in Nice, France.

The first of the two events, GW200105, was observed by the LIGO Livingston and Virgo detectors. It produced a strong signal in the LIGO detector but had a small signal-to-noise in the Virgo detector. The other LIGO detector, located in Hanford, Washington, was temporarily offline. Given the nature of the gravitational waves, the team inferred that the signal was caused by a black hole colliding with a 1.9-solar-mass compact object, later identified as a neutron star. This merger took place 900 million light-years away.

Because the signal was strong in only one detector, the location of the merger on the sky remains uncertain, lying somewhere in an area that is 34,000 times the size of a full moon.

“With our current sensitivity, we cannot really identify the subtle signal details that let us know whether we are witnessing black holes or neutron stars. This was possible for GW170817 because we also saw the electromagnetic counterpart. However, considering the masses we expect black holes and neutron stars to have, we conclude that the smallest objects involved in these collisions are most likely neutron stars,” says Juan Calderon Bustillo, “La Caixa Junior Leader Fellow” at IGFAE.

The second event, GW200115, was detected by both LIGO detectors and the Virgo detector. GW200115 comes from the merger of a black hole with a 1.5-solar mass neutron star that took place roughly 1 billion light-years from Earth.

“Since all three instruments were observing for this event, we were able to exclude a terrestrial noise origin much more precisely: the PyCBC search method, developed at IGFAE, rules out a rate of false alarms greater than 1 per 50,000 years,” says Thomas Dent, leader of the Gravitational Waves research programme at IGFAE. Although the three-detector network also helps to narrow down the part of the sky where the event could have occurred, this area was still almost 3,000 times the size of the full moon.

Astronomers were alerted to both events soon after they were detected in gravitational waves and subsequently searched the skies for associated flashes of light. None were found. This is not surprising due to the very large distance to these mergers, which means that any light coming from them, no matter what the wavelength, would be very dim and hard to detect with even the most powerful telescopes. Additionally, the mergers likely did not give off a light show in any case because their black holes were big enough that they swallowed the neutron stars whole.

“These were not events where the black holes munched on the neutron stars like the cookie monster and flung bits and pieces about. That ‘flinging about’ is what would produce light, and we don’t think that happened in these cases,” says Patrick Brady, a professor at University of Wisconsin-Milwaukee and Spokesperson of the LIGO Scientific Collaboration.

Previously, the LIGO-Virgo network found two other candidate neutron star-black hole mergers. One event called GW190814, detected August 14, 2019, involved a collision of a 23-solar-mass black hole with an object of about 2.6 solar masses, which could be either the heaviest known neutron star or the lightest known black hole. Another candidate event, called GW190426, and detected on April 26, 2019, was thought to possibly be a neutron star-black hole merger, but could also simply be the result of detector noise.

Having confidently observed two examples of gravitational waves from black holes merging with neutron stars, researchers now estimate that, within one billion light-years of Earth, roughly one such merger happens per month.

“The detector groups at LIGO, Virgo, and KAGRA are improving their detectors in preparation for the next observing run scheduled to begin in summer 2022,” says Brady. “With the improved sensitivity, we hope to detect merger waves up to once per day and to better measure the properties of black holes and super-dense matter that makes up neutron stars.”

Additional information about the gravitational-wave observatories and collaborations:

This material is based upon work supported by NSF’s LIGO Laboratory which is a major facility funded by the NSF. LIGO is operated by Caltech and MIT, which conceived of LIGO and led the Advanced LIGO detector project. Financial support for the Advanced LIGO project was principally from the NSF with Germany (Max Planck Society), the U.K. (Science and Technology Facilities Council) and Australia (Australian Research Council-OzGrav) making significant commitments and contributions to the project. Approximately 1,400 scientists from around the world participate in the effort to analyze the data and develop detector designs through the LIGO Scientific Collaboration, which includes the GEO Collaboration. A list of additional partners is available at https://my.ligo.org/census.php.

The Virgo Collaboration is currently composed of approximately 650 members from 119 institutions in 14 different countries including Belgium, France, Germany, Hungary, Italy, the Netherlands, Poland, and Spain. The European Gravitational Observatory (EGO) hosts the Virgo detector near Pisa in Italy, and is funded by the Centre National de la Recherche Scientifique (CNRS) in France, the Istituto Nazionale di Fisica Nucleare (INFN) in Italy, and Nikhef in the Netherlands. A list of the Virgo Collaboration groups can be found at http://public.virgo- gw.eu/the-virgo-collaboration. More information is available on the Virgo website at http://www.virgo-gw.eu.

The KAGRA detector is located in Kamioka, Gifu, Japan. The host institute is the Institute of Cosmic Ray Researches (ICRR) at the University of Tokyo, and the project is co-hosted by National Astronomical Observatory in Japan (NAOJ) and High Energy Accelerator Research Organization (KEK). KAGRA completed its construction in 2019, and later joined the international gravitational-wave network of LIGO and Virgo. The actual data-taking was started in February 2020 during the final stage of the run called “O3b.” The KAGRA collaboration is composed of over 470 members from 11 countries/regions. The list of researchers is available from http://gwwiki.icrr.u-tokyo.ac.jp/JGWwiki/KAGRA/KSC/Researchers. KAGRA information is at the website https://gwcenter.icrr.u-tokyo.ac.jp/en/.