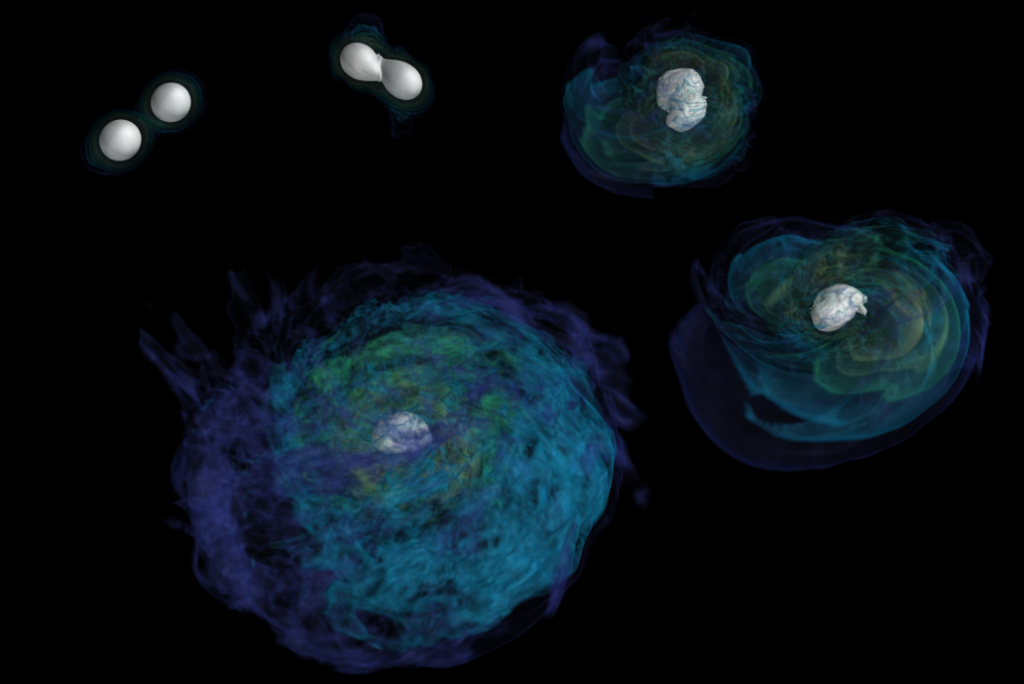 On April 25th the LIGO Observatory and Virgo gravitational-wave detector registered new ripples in space and time from what appears likely to be a crash between two neutron stars. One day later, the LIGO-Virgo network may have spotted an event never before witnessed: a neutron star-black hole collision.

On April 25, 2019, the Laser Interferometer Gravitational-Wave Observatory (LIGO), an expe-rimental project funded by the US National Science Foundation in which the Instituto Galego de Física de Altas Enerxías (IGFAE), a joint instititute of the Universidade de Santiago (USC) and Xunta de Galicia, is collaborating, and the European Virgo detector registered gravitati-onal waves from what appears likely to be a crash between two neutron stars. On April 26, the LIGO-Virgo network spotted another candidate source: it may in fact have resulted from the collision of a neutron star and black hole, an event never before witnessed.

The discoveries come just weeks after LIGO and Virgo turned back on. The twin detectors of LIGO—one in Washington and one in Louisiana, (USA)—along with Virgo, located at the European Gravitational Observatory (EGO) in Italy, resumed operations April 1, after undergoing a series of upgrades to increase their sensitivities to gravitational waves. Each detector now surveys larger volumes of the universe than before, searching for extreme events such as collisions of black holes and neutron stars.

When two black holes collide, they warp the fabric of space and time, producing gravitational waves. When two neutron stars collide, they not only send out gravitational waves but also light that ground-based and spatial telescopes can witness. One such event occurred in August 2017: LIGO and Virgo initially spotted a neutron star merger in gravitational waves and then, in the days and months that followed, about 70 telescopes observed the event in the whole electromagnetic spectrum, from gamma rays to radio waves. In the case of the two recent neutron star candidates, telescopes around the world once again raced to track the sources and pick up the light —the optical counterpart- and other types of radiation expected to arise from these mergers. However, at this time, neither of the sources has been pinpointed.

On April 25 neutron star smash-up, dubbed S190425z, is estimated to have occurred about 500 million light-years away from Earth. Only one of the twin LIGO facilities picked up its signal along with Virgo: LIGO Livingston witnessed the event but LIGO Hanford was offline. Because only two of the three detectors registered the signal, estimates of the location in the sky from which it originated were not precise, leaving astronomers to survey nearly one-quarter of the sky for the source.

The possible April 26 neutron star-black hole collision, referred to as S190426c, is estimated to have taken place roughly 1.2 billion light-years away. It was seen by all three LIGO-Virgo facilities, which helped better narrow its location to regions covering about about 3 percent of the total sky.

Image: Simulation of a binary neutron star merger. From top left, clockwise: the two neutron stars (drawn in white) spiral around each other, come into contact, and merge into one heavy neutron star. Some of the material (with color-coded density) pollutes the surrounding environment and forms a thick accretion disk around the remnant object. The whole sequence covers about 0.03 s of evolution. In most cases, the heavy neutron star cannot survive its own gravity for much longer, eventually collapsing into a black hole. Credit: Ciolfi, Giacomazzo (Virgo Collaboration) & Kastaun (LIGO Scientific Collaboration).