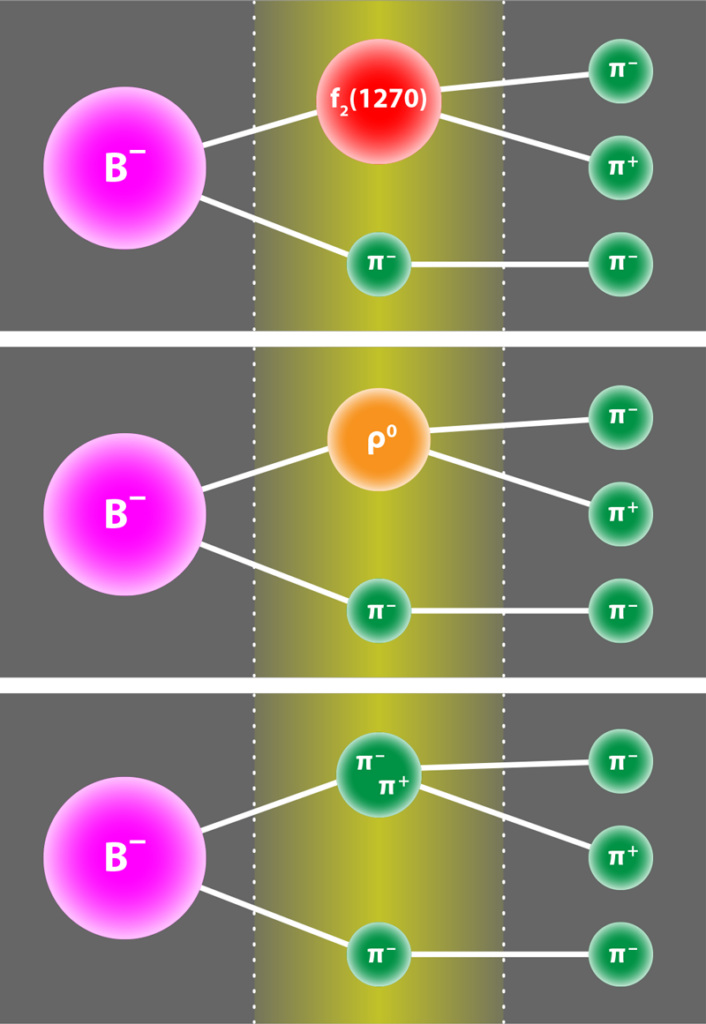 Measurements show large matter-versus-antimatter differences in three-pion decays of B mesons, yielding new insights into the strong interaction dynamics that control these decays.

In its quest to understand the dominance of matter over antimatter in the Universe, the LHCb collaboration, in which the Galician Institute of High Energetic Physics (IGFAE) participates, reported last summer a paper that helped to understand the mechanisms that produce a quantifiable difference between . Now, two new articles that continue researching the three-pion decays of B meson B observe large matter-antimatter violations. The work also shed some light on the strong interaction dynamics that control these processes and has been featured as Editors’ Suggestion in Physical Review Letters and Physical Review D.

When a B meson decays into three pions, CP violation −the mechanism to explain the asymmetry between matter and antimatter− is expected. However, the exact amount of violation is not well predicted because the difficulty in calculating the strong interactions between the mesons. This strong interaction dynamics produces intermediate states during decays which each have different CP asymmetry. Now, the LHCb has an enormous data sample that provides enough statistics to not only observe CP violating effects but to also test and validate models of the behavior of the strong interaction in these decays for the first time.

The collaboration observed CP violation in two of the three-pion decay modes, with a statistical significance of more than 10 sigmas, exceeding the threshold of 5 standard deviations used in particle physics to validate a discovery. The “f2 (1270)” mode showed an asymmetry of 40%, while the “spin-0” mode had 15%.

Both CP violations are consistent with those predicted by the Standard Model and can be used to detect more accurately new sources that violate asymmetry in related decays, such as decays of neutral B mesons to three pions. Meanwhile, we will have to wait for new measurements of the LHCb or the recently commissioned Belle II experiment in SuperKEKB accelerator, in Japan, to discover new sources of CP violation that are beyond the Standard Model.

The implications of these results within the fundamental physics community have been recently featured in an article in Physics and in a news report in Nature Reviews Physics.