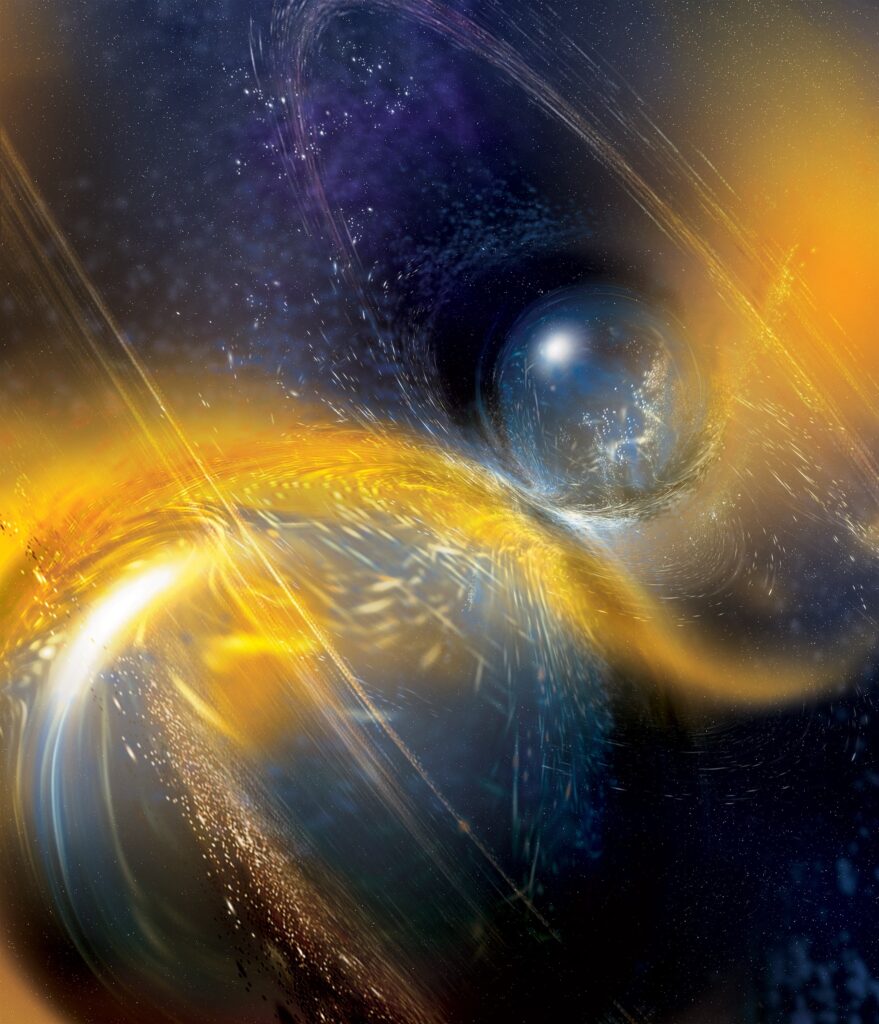 On January 6th 2020, the LIGO Scientific Collaboration, in which the Galician Institute of High Energy Physics (IGFAE) participates, and the Virgo Collaboration announced the first detection of gravitational waves from the third observation period, O3. The source of the detected signal, named GW190425, is consistent with the merger of a compact binary with total mass of about 3.4 Msun.

On April the 25th, 2019, the network of gravitational-wave (GW) detectors formed by the European Advanced Virgo, in Italy, and the two Advanced LIGO, in the US, detected a signal, named GW190425. This is the second observation of a gravitational-wave signal consistent with the merger of a binary-neutron-star (BNS) system after GW170817. GW190425 was detected at 08:18:05 UTC; about 40 minutes later the LIGO Scientific Collaboration and the Virgo Collaboration sent an alert to trigger follow-up telescope observations.

“We have detected a second event consistent with a binary neutron star (BNS) system and this is an important confirmation of GW170817, the event that started multi-messenger astronomy two years ago. The total mass is larger than any known BNS, and this has interesting astrophysical implications for the formation of this system,” says Jo van den Brand, Virgo Spokesperson and professor at Maastricht University, Nikhef and VU University Amsterdam in the Netherlands. “What’s surprising is that the combined mass of this binary is much higher than what was expected,” adds Ben Farr, a LIGO team member based at the University of Oregon, USA.

The source of GW190425 is estimated to be at a distance of 500 million light years from the Earth. It is localized in the sky within an area about 200 times broader than was the case for the BNS observed by LIGO and Virgo in 2017, the famous GW170817, which gave birth to multi-messenger astrophysics. This is due to the fact that the GW190425 signal was only detected with a high signal-to-noise ratio by LIGO at Livingston. At the time, the LIGO Hanford detector was temporarily offline, while the signal reconstructed in Virgo was weak, because of a difference in sensitivity with respect to LIGO Livingston and because of the likely direction of origin of the signal: a region of the sky in which Virgo was less sensitive at the time the signal arrived on Earth. This less precise sky localisation makes it very difficult to search for counterparts (electromagnetic signals, neutrinos or charged particles). Indeed, unlike GW170817, no such counterpart has been found to date. Nevertheless, Virgo data have been subsequently used to improve the characterisation of the astrophysical system.

“This is our first event published of a single detector, although Virgo did a very valuable contribution, since we used its data to determine accurately the direction of the source of the signal”, says Anamaria Effler of Caltech, a scientist working at the LIGO-Livingston Observatory.“Despite the differences of the signal-to-noise ratio coming from the different interferometers, due to the known differences in range and angular sensitivities, the joint detection stresses once more the importance of the international network”, says Stavros Katsanevas, Director of the European Gravitational Observatory (EGO) which hosts Advanced Virgo in Italy, near Pisa.

There are a few explanations for the origin of GW190425. The most likely is the merger of a BNS system. Alternatively, it might have been produced by the merger of a system with a black hole (BH) as one or both components, even if light BHs in the mass-range consistent with GW190425 have not been observed. Yet, on the basis solely of GW data, these exotic scenarios cannot be ruled out. The estimated total mass of the compact binary is 3.4 times the mass of the Sun. Under the hypothesis that GW190425 originated from the merger of a BNS system, the latter would have been considerably different to all known BNS in our galaxy, the total mass range of which is between 2.5 and 2.9 times the mass of the Sun. This indicates that the NS system that originated GW190425 may have formed differently than known galactic BNSs.

GW190425 was recognised as an interesting candidate event soon after the detection. It was issued as a public alert by LIGO-Virgo, as is done for all candidate gravitational-wave events during the underway third observation period, O3. Public alerts are freely accessible at the Gravitational-Wave Candidate Event Database.

“The ICCUB and IFAE institutes in Barcelona and the University of Valencia are members of the Virgo Collaboration. They have contributed actively in the commissioning of the interferometer during O3 observation period. In addition, ICCUB and IFAE are participating in hardware upgrades for Virgo with the aim to improve further the sensitivity of the interferometer in the near future translating into an increase rate of events”, says Mario Martínez, Virgocoordinator group at IFAE. “This event and those that will be discovered in the near future open a new window in astronomy with gravitational waves and a possible understanding of basic aspects in fundamental physics and cosmology.”

“The GW190425 signal is really interesting because unraveling its origin is a theoretical challenge. It is very likely to be due to the fusion of two neutron stars, which makes its parent special because it would have a total mass significantly higher than that of all such systems observed in our galaxy,” says José Antonio Font, coordinator of the Virgo group at the University of Valencia. “However, since it is not possible to rule out that the signal comes from a fusion of light black holes, its formation could support the existence of black holes in the apparent mass range between neutron stars and black holes or even other exoticalternatives like the fusion of primordial black holes. Without a doubt, this is the kind of event that makes gravitational wave astronomy such an exciting field of research”.

Alicia Sintes, coordinator of the LIGO group at the University of the Balearic Islands, emphasizes that “nature never ceases to amaze us and the LIGO-Virgo observatories work together to reveal the mysteries of the Universe. On this day as marked as the day of the Three Wise Men, we have the pleasure to announce a new detection and mark the beginning of a very special new year for us. The measurement of the source parameters, and in particular the remarkable total mass of the system, are based on mathematical models of the gravitational wave signal that have been built with the participation of the UIB group, which also had a PhD student, Pep Covas Vidal, at the LIGO-Hanford Observatory during the observation of this event.”

“Although the first neutron stars merger detected by LIGO-Virgo (GW170817) was a surprise due to its proximity to the Solar System and its bright emission in visible light, the second detection, GW190425, is more mysterious due to its high mass, which does not match the binary neutron-star systems detected by radio-telescopes in our galaxy”, points out Thomas Dent, coordinator of LIGO at the IGFAE of the University of Santiago. “Our team is currently playing a leading role in coordinating BNS merger populations, with the aim of better understanding the origin of these types of events, as well as contributing to the improvement of the sensitivity of search algorithms to increase the probability of detecting more neutron star mergers. ”

Spanish contribution to an international colaboration

The Virgo Collaboration is currently composed of approximately 520 scientists, engineers, and technicians from 100 institutes in 11 different countries, including: Belgium, France, Germany, Hungary, Italy, the Netherlands, Poland, and Spain. The European Gravitational Observatory (EGO) hosts the Virgo detector near Pisa in Italy, and is funded by the Centre National de la Recherche Scientifique (CNRS) in France, the Istituto Nazionale di Fisica Nucleare (INFN) in Italy, and Nikhef in the Netherlands. A list of the Virgo Collaboration groups can be found at http://public.virgo-gw.eu/the-virgo-collaboration/. More information is available on the Virgo website at http://www.virgo-gw.eu.

LIGO is funded by the National Science Foundation (NSF) and operated by Caltech and MIT, which conceived of LIGO and lead the project. Financial support for the Advanced LIGO project was led by the NSF with Germany (Max Planck Society), the U.K. (Science and Technology Facilities Council) and Australia (Australian Research Council-OzGrav) making significant commitments and contributions to the project. Approximately 1,300 scientists from around the world participate in the effort through the LIGO Scientific Collaboration, which includes the GEO Collaboration. A list of additional partners is available at https://my.ligo.org/census.php.

Video: This video shows the numerical relativity simulation of a binary neutron star merger compatible with the source of the GW190425 signal, detected by the LIGO-Virgo global network of gravitational-wave detectors on April 25th, 2019. The two neutron stars have masses 1.75 and 1.55 times the solar mass, corresponding to the median values from the signal’s analysis (low-spin priors), and are initially at a orbital separation of 45 km. The video is made of two parts, both showing the last orbits of the neutron stars, then their collision, followed by the prompt collapse of the remnant into a black hole. The first visualization focuses on the dynamics of the neutron star matter in the strong field central region; the highest mass-density (blue) are above nuclear densities, the white surfaces appearing later approximates the black hole horizon. The bottom inset shows the real part of the dominant mode of the gravitational wave emitted far away. The second part, a zoomed out of the same simulation, shows the propagation of the emitted gravitational waves far from the source. The color-coded surface shows the curvature (Weyl scalar) on the orbital plane. Credits: CoRe collaboration www.computational-relativity.org / Jena FSU.