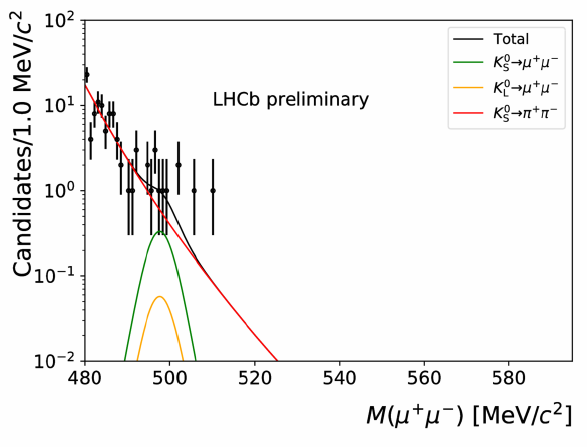 18 NovHunting for the rarest strange decay

The LHCb collaboration presented at the “International Conference on Kaon Physics 2019” preliminary measurements of the K0S decay (particle composed of two quarks) into muon pairs (particles almost identical to the electron, but more massive). The search for this event is a challenge because it is extremely infrequent only five out of every trillion K0S decays according to the Standard Model- an it is the most accurate measurements of a decay rate to date.

To find this phenomenon, the detection algorithms of the LHCb experiment had to be significantly modified. This modification was carried out within the framework of the ERC project of IGFAE researcher Diego Martínez Santos, who was awarded in 2013 with the Young Experimental Physicist Prize of the European Physics Society for the measurement of B0s decay —a particle similar to K0s, but of greater mass— in two muons, with a frequency of three parts per thousand millions. Although these decays are far from common, they are very important in particle physics because allow to verify the presence or absence of quantum fields not included in the Standard Model. These fields would deviate the measured value from the prediction of the Model.

If the prediction of the Standard Model is correct, the analyzed data sample should contain approximately two of these K0S decays. If confirmed, it would be the rarest decay ever registered, and a thousand times more infrequent than of the Bs meson. In the absence of a significant signal, an upper limit four times more stringent than the previous best limit was obtained. This decay rate is very sensitive to possible contributions from new, yet-to-be discovered particles, such as leptoquarks or super-symmetric particles that are too heavy to be observed directly at the LHC

In the short term, the accuracy of this search will continue to be refined with the new data expected from 2021 once the LHCb detector is updated. In addition to the increase in brightness, the new detection software is expected to significantly improve signal efficiency.

This work was presented at the “International Conference on Kaon Physics 2019” by IGFAE predoctoral researcher Miguel Ramos Pernas and was included among the three highlighted results of the meeting (apart from a new one from KOTO (Japan) and the CERN-NA62 project). The analysis team was composed by IGFAE researchers Diego Martínez Santos, Miguel Ramos Pernas, Claire Prouve, Veronika Chobanova, Xabier Cid Vidal and Alexandre Brea, as well as M. Bettler (Cambridge) and G. Graziani (INFN Firenze). The results are included in the November/December issue of CERN Courier.

Image: Invariant mass distribution obtained after the reconstruction and selection of pairs of oppositely charged muons, candidates for the KS0 -> mu+ mu- decay. Lines refer to the different components of a fit to this spectrum. The black line corresponds to the total model, the green line to the signal component, the orange line to KL0 -> mu+ mu- decays, and in red to the contribution from KS0 -> pi+ pi- decays, where the two pions are misidentified as muons. The number of observed KS0 -> mu+ mu- candidates is compatible with zero.