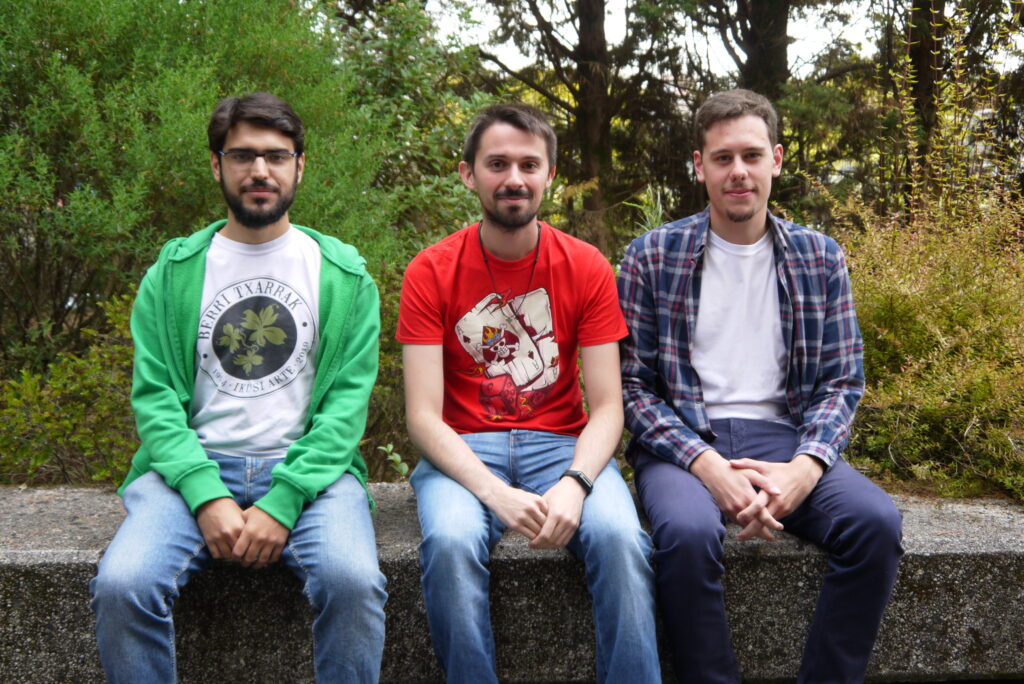 The IGFAE students Alberto Rivadulla Sánchez, Julián Lomba Castro and Marcos González Martínez have just obtained the FPU grants (Universitary Professor Training) summoned annually by the Ministry of Science, Innovation and Universities. This funding will allow them to develop their PhS thesis the next four years.

They will contribute to the lines of research carried out at the center, while acquiring universitary teaching skills. All of them, who did their studies in Physics at the USC (University of Santiago de Compostela) will also continue their training when preparing their thesis at the IGFAE, joint center of the USC and the Xunta de Galicia..

The idea of ​​Alberto Rivadulla Sánchez’s thesis was outlined when he was the beneficiary of one of the MECD collaboration grants during his last year of his career. It will focus on holographic duality or AdS / CFT correspondence, a project that emerged from string theory in the 1990s and that attempts to unify the physics of the very small and large: quantum mechanics and general relativity theory . This conjecture is interesting because it allows describing various physical scenarios, from hadron collisions to condensed matter systems, the main objective of the doctoral thesis. Among the many alternatives that aspire to solve this crossroads, Alberto is working with a series of theories that include corrections regarding Einstein’s Theory of Relativity and that stand out for their results in cosmology. The work will aim to understand its meaning in the problem of dual quantum physics.

Investigating the existence of undiscovered particles

Julián Lomba Castro will take advantage of the FPU to osiblehis research on a type of particle disintegration that may be incorrect in the Standard Model, the theory that explains the fundamental ingredients of matter and its interactions. Specifically, he will try to test the leptonic universality, which predicts that all leptons have the same properties except for their different masses. When colliding protons, some particles become leptons, and by measuring the frequency of these decays, it is osible to verify whether or not the osibl universality is fulfilled. Some results indicate a osible disagreement with the Standard Model, which would indicate the osible existence of particles that have not yet been detected.

The search for origins through the plasma of quarks and gluons

Marcos González Martínez’s thesis aims to find out how matter formed just after the Big Bang, when it was at a temperature so high that atomic nuclei could not form and everything was filled with a plasma of quarks and gluons (QGP, for its acronym in English). To reproduce this state of matter, heavy ions must be collided at very high energy, at speeds close to those of light in accelerators such as the LHC. Until now, it was usual to produce the plasma in the laboratory and, once formed, study its properties with experimental measurements; however, the challenge of this thesis is to develop completely new theoretical techniques to analyze the first 10 yoctoseconds of the collisions (when the QGP begins to form), that is, 10 four-thousandths of a second, and thus obtain relevant information on the subject in the first moments of the universe.