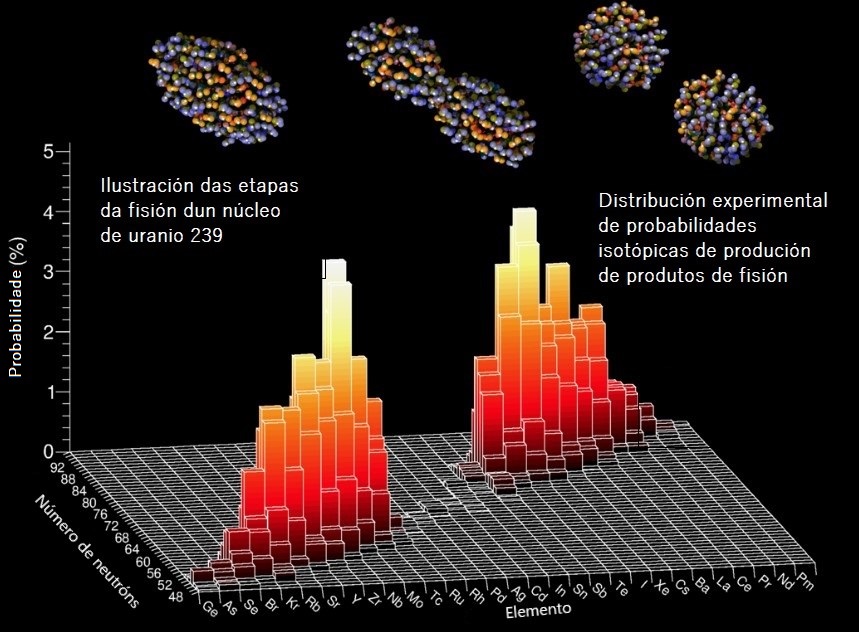 An experiment led by IGFAE researcher Manuel Caamaño, in collaboration with an international team in GANIL, accurately measures and identifies the fission fragments of uranium 239 using a new technique. The results are published Physical Review Letters.

Despite having been started 80 years ago, the study of nuclear fission is still relevant for two main reasons:we do not fully understand how it works and yet it is crucial for applications in energy and industry. For example, in the Peninsula nuclear power plants generated 22.4% of electricity in 2017. Although we are far from 72% of France, it is the primary source of energy in Spain, followed by wind power with 19.1%.

A paradigmatic example of nuclear fission processes is uranium 239, an isotope with 92 protons and 147 neutrons that can produce fission if a uranium 238 isotope is bombarded with neutrons. When a uranium 238 captures a neutron, it becomes a “hot” uranium 239 nucleus, with enough energy to fission. When divided into two, the ouputs of this reaction can be of hundreds of different possibilities, with more or less known probabilities. In previous experiments the mass of the emitted fragments has been measured, but the limitations in the detection systems did not allow to know what elements were being produced and in what proportion. At this point, there was no option but to rely on theoretical models.

However, in 2017 there was a double surprise: a new experiment was able to identify indirectly the elements and their proportion in neutron-induced fission of 239U, and the results showed a huge deviation from theory. In short, it was believed that the structure of tin 132 (132Sn) isotope played a significant role in the production of the fragments, but the new data found that that was not the case at all. As per usual, an unexpected result needs confirmation, and this one in particular raised doubts due to indirect nature of the experimental technique used.

A novel and unique technique

In order to shed some light on these results, IGFAE researchers profited from an experimental campaign they were running in GANIL (Grand Accélérateur National d’Ions Lourds), in France. Since they were using a novel and unique technique to measure completely and directly the properties of fission fragments, they decided to study an equivalent reaction and compare as many observables as they could with the previous measurement. The conclusions were clear: they were able to measure a wide set of properties of the fragments, including their elemental identification, and the production does not show any deviation from the expected role of the 132Sn, as reported in the previous experiment.

For now, theory is right. However, this experiment led by IGFAE researcher Manuel Caamaño was not only dedicated to debunk that anomaly. Now, the data is being analyzed in Santiago by Daniel Fernández and Giorgia Mantovani, PhD students at IGFAE, and in France by Diego Ramos, postdoctoral researcher at GANIL, graduated from IGFAE and first author of this work. In the future, and is expected to give more insight into the fission process from direct observables and for a number of different fissioning nuclei, taking advantage from the one-of-a-kind experimental setup we have at GANIL

Image: The figure shows the proportion at which each isotope is produced in the 239U fission. The way in which this proportion is distributed is a consequence of the internal nuclear structure, that is, of how the protons and neutrons are arranged within the fragments that are formed in the process. Credit: GANIL.