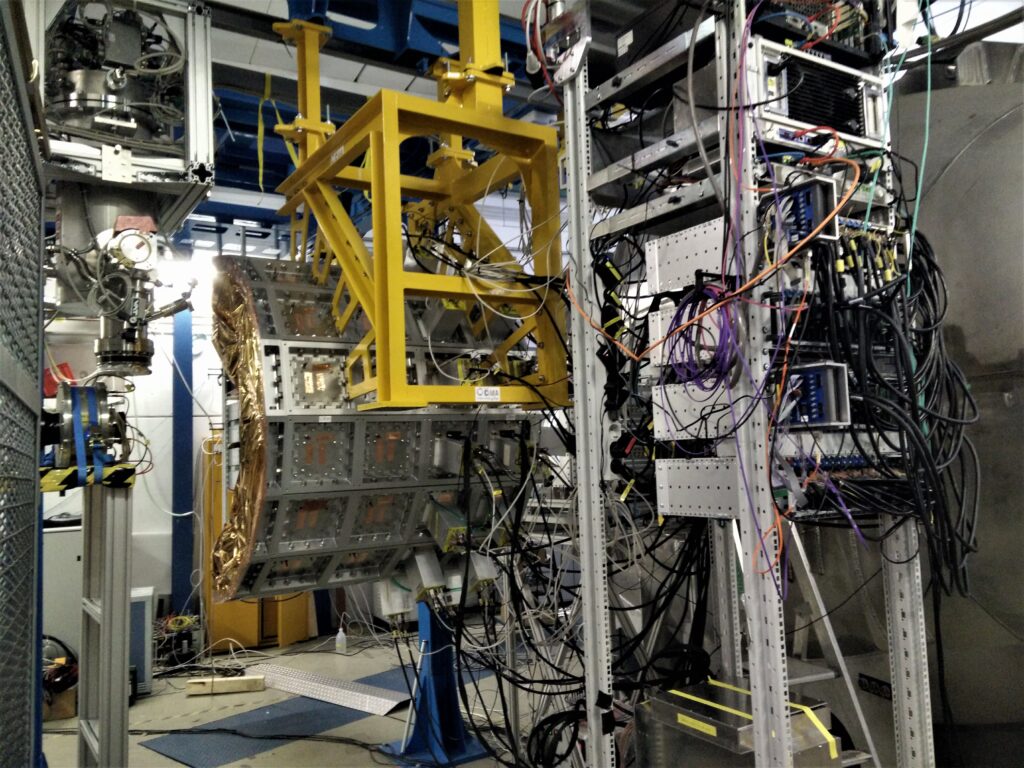 04 DecCALIFA is installed at FAIR

The detector, whose design and construction was led by the Galician Institute of High Energy Physics (IGFAE), will study the structure of “exotic” atomic nuclei at FAIR. This nuclear research laboratory is one of the strategic scientific infrastructures of the European Commission. The University of Vigo and several Galician companies have also participated in the design and construction of the mechanical structure of CALIFA.

CALIFA is already installed in the R3B experiment at FAIR accelerator, one of the European scientific reference facilities in Nuclear Physics, in Darmstadt (Germany). After completing its design and construction, the commissioning of CALIFA will allow for precision experiments taking advantage of the first beams of accelerated ions in FAIR. With them, the structure and dynamics of unstable or exotic atomic nuclei will be studied from 2020.

The IGFAE has been participating for more than a decade in the R3B (Reactions with Relativistic Radioactive Beams) collaboration, composed by 230 people from 15 countries and led since May 2017 by the IGFAE researcher and USC professor USC Dolores Cortina. Her team led between 2005 and 2017 the design and construction of its detector, CALIFA (CALorimeter for In-Flight detection of gamma-rays and high energy charged pArticles), a novel calorimeter capable of detecting charged particles and gamma radiation simultaneously, covering a unprecedented energy range: from kiloelectronvolts (KeV) to hundreds of megaelectronvolts (MeV). It should be noted that the detection technology used in this type of detectors, as well as the reconstruction techniques of the information that is collected, are common with those developed in medical imaging and are useful for the diagnosis of diseases.

R3B will use radioactive ions at speeds close to those of light and will allow the development of a broad research program that will address crucial issues for nuclear physics, such as the study of fundamental properties of atomic nuclei and the force responsible for joining protons and neutrons. In addition, it will allow to reproduce the reactions that take place in the stars, responsible for generating their energy and creatr the elements we see in the Universe.

In the construction of CALIFA, whose cost exceeds 3.5 million euros in its first phase (22% of which have been financed with funds raised by this team) and more than 5 million euros in total, participated researchers from Germany, Sweden and Russia. Within Spain, the Galician contribution has been remarkable. Since 2005, IGFAE collaborates with the CIMA group of mechanical engineering of the Universidade de Vigo, responsable of the design of the detector’s mechanical structure. In addition, specialized Galician companies have been responsible for the manufacture of carbon fiber, precision machining and metrology. Another of the Spanish groups of CALIFA are from Instituto de Estructura de la Materia (IEM-CSIC) focused on the development of innovative scintillators for the front of the detector that will receive a huge amount of radiation and where the resolution in energy plays a very important role.

FAIR (Facility for Antiproton and Ion Research) is a new priority international research center for the European Commission, included in the ESFRI 2018 roadmap that identifies the strategic scientific facilities of pan-European interest. An international consortium contributes to finance the 1.5 billion euros of this laboratory, equipped with the most powerful accelerators of antiprotons and heavy ions in the world. There, more than 3,000 people from 50 countries will study the structure and properties of the visible matter that forms the Universe, developing basic and applied research in the field of nuclear physics. In Spain, more than 50 researchers from CSIC, CIEMAT and the Universidad Complutense de Madrid, Granada, Huelva, Polytechnic of Barcelona, ​​Seville, Santiago de Compostela and Vigo participate.

Image: from the left, view of the beam line of CALIFA at FAIR. Credits: IGFAE. 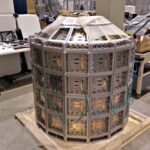 Arrival of the mechanical structure of CALIFA to FAIR. 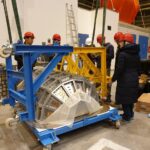 Installing one of the halves of CALIFA to its nominal position 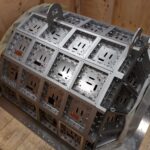 Arrival of the first half of the mechanical structure of CALIFA to FAIR. 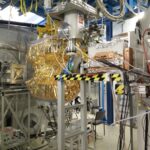 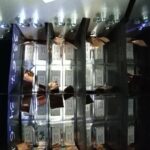 View of a sector, scintillation crystals and Avalanche Photodiodes