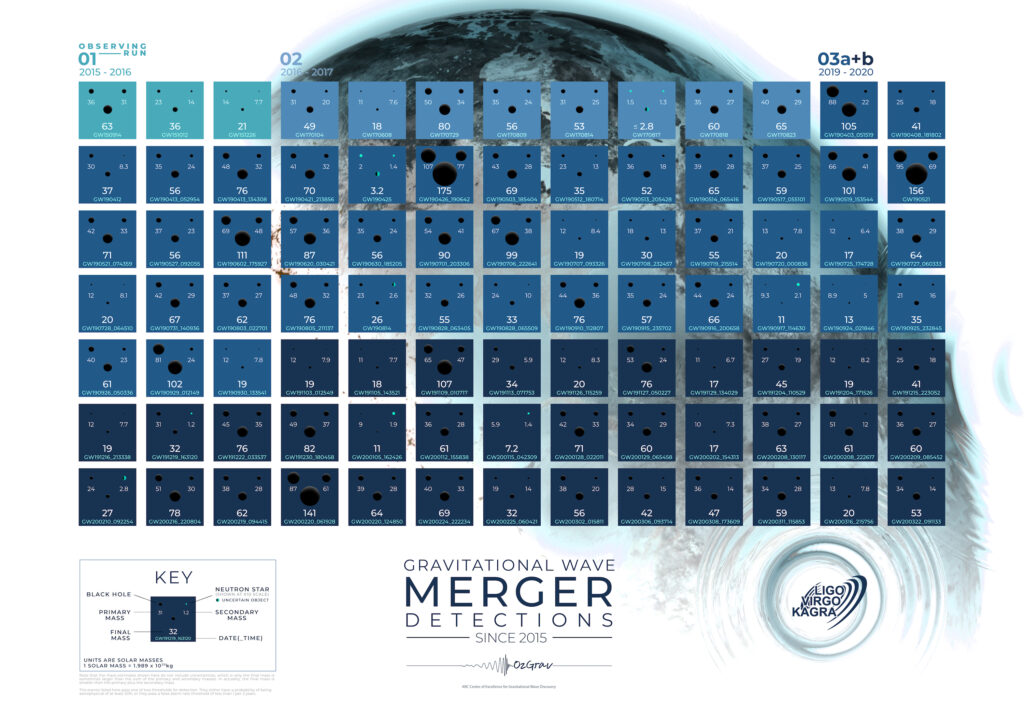 The catalog updates the list of all gravitational-wave events observed to date with events observed between November 2019 and March 2020, using three international detectors:

Data from these three detectors have been carefully analyzed by an international team of scientists from the LIGO Scientific Collaboration, the Virgo Collaboration and the KAGRA Collaboration.

Of the 35 events detected, 32 of those were most likely to be black hole mergers – two black holes spiralling around each other and finally joining together, an event which emits a burst of gravitational waves.

Two of the 35 events spotted were likely to be neutron stars and black holes merging – a much rarer event, and one that was only discovered in the most recent observing run of LIGO and Virgo.

The masses of black holes and neutron stars are key clues to how massive stars live their lives and die in supernova explosions.

Juan Calderón Bustillo, “La Caixa Junior Leader” fellow at the IGFAE, comments that “while the first dozen events we observed were very similar to each other, we are now beginning to unravel an important variety of black hole pair mergers: from very asymmetric to very heavy mergers that give rise to what we call intermediate-mass black holes. However, we have yet to observe a large part of this mysterious black hole zoo and who knows if any other surprises. This will require improved detectors and more refined search algorithms. “

One of the gravitational-wave events in the catalog came from two objects merging where one was almost certainly a black hole (with a mass around 24 times the mass of our Sun) but the other was either a very light black hole or a very heavy neutron star of around 2.8 times the mass of our Sun. Scientists have deduced it is most likely to be a black hole but cannot be entirely sure. A similar ambiguous event was discovered by LIGO and Virgo in August 2019. The mass of the lighter object is puzzling, as scientists expect that the most massive a neutron star can be before collapsing to form a black hole is around 2.5 times the mass of our Sun. However, no black holes had been discovered with electromagnetic observations with masses below about 5 solar masses. This led scientists to theorize that stars do not collapse to make black holes in this range. The new gravitational wave observations indicate that these theories may need to be revised.

Gravitational waves were first predicted by Albert Einstein from his theory of general relativity in 1916. Because the gravitational waves reaching Earth are so minuscule, it took many decades of work to build instruments precise enough to measure them.

Since the first gravitational wave detection in 2015, the number of detections has risen at a thundering rate. In a matter of years, gravitational wave scientists have gone from observing these vibrations in the fabric of the universe for the first time, to now observing many events every month, and even multiple events on the same day.

Gravitational wave detectors operate by using high power lasers to carefully measure the time taken for light to travel between mirrors along two perpendicular arms. In the third observing run, the gravitational wave detectors reached their best-ever performance. To achieve this monumental progress, the pioneering instruments have been getting more sensitive thanks to a program of constant upgrades and maintenance. The LIGO and Virgo detectors continue to improve with, for example, increased laser power and the installation of squeezed light. The excellent sensitivities of the detectors have allowed for the observation of so many more exciting gravitational wave events, including the first ever confident neutron star-black hole binary detection.

Eyes on the skies

As the rate of gravitational wave detections increases, scientists have also improved their analytical techniques to ensure the high accuracy of results. The growing catalog of observations will enable astrophysicists to study the properties of black holes and neutron stars with unprecedented precision.

Thomas Dent, GW research program leader at IGFAE, says “These recent detections, including a new type of compact binary, are of great astronomical interest in themselves: but also, the more gravitational-wave sources we detect, the better we are able to leverage them to investigate broader scientific puzzles. These questions include the expansion rate of the Universe, the physics of gamma-ray bursts, and how black holes and neutron stars formed and evolved over cosmic history – all addressed in papers appearing simultaneously with the new catalog.”

Identifying signals in the detector data requires careful analysis to distinguish real gravitational waves from noise. Using information from the international network of detectors collected during the observing run, the team was able to carefully deduce which detections were truly interesting.

In another significant advancement in this recent run, within minutes of the initial detections, astronomers issued a public call to other observatories and detectors around the world. This network of neutrino detectors and electromagnetic observatories focused on the area the waves were coming from, to try to identify the source event. Such electromagnetic and neutrino counterparts to gravitational wave signals are rare, and extremely challenging to find. Being able to search quickly is a huge advantage. None of the newly announced gravitational waves have a reported counterpart.

The future of the field

The LIGO and Virgo observatories are currently undergoing improvements before the upcoming fourth observing run, expected to begin in the latter half of next year.

The KAGRA observatory in Japan will also join the next full observing run. Located deep under a mountain, KAGRA completed a successful first observing run in 2020, but has yet to join LIGO and Virgo in making joint observations. With more detectors, potential events can be located more accurately.

As more detections are confidently added to the gravitational wave catalog, researchers are learning more and more about these astronomical phenomena.

Before the next observing run, scientists will be busy further analyzing the existing information, learning more about neutron stars and black holes, and searching for new types of signals hidden in the data.

LIGO is operated by Caltech and MIT, which conceived of LIGO and led the Advanced LIGO detector project. Financial support for the Advanced LIGO project was principally from the NSF with Germany (Max Planck Society), the U.K. (Science and Technology Facilities Council) and Australia (Australian Research Council-OzGrav) making significant commitments and contributions to the project. Approximately 1,400 scientists from around the world participate in the effort to analyze the data and develop detector designs through the LIGO Scientific Collaboration, which includes the GEO Collaboration. A list of additional partners is available at https://my.ligo.org/census.php.

The Virgo Collaboration is currently composed of approximately 650 members from 119 institutions in 14 different countries including Belgium, France, Germany, Hungary, Italy, the Netherlands, Poland, and Spain. The European Gravitational Observatory (EGO) hosts the Virgo detector near Pisa in Italy, and is funded by the Centre National de la Recherche Scientifique (CNRS) in France, the Istituto Nazionale di Fisica Nucleare (INFN) in Italy, and Nikhef in the Netherlands. A list of the Virgo Collaboration groups can be found at http://public.virgo- gw.eu/the-virgo-collaboration. More information is available on the Virgo website at http://www.virgo-gw.eu.

The KAGRA detector is located in Kamioka, Gifu, Japan. The host institute is the Institute of Cosmic Ray Researches (ICRR) at the University of Tokyo, and the project is co-hosted by National Astronomical Observatory in Japan (NAOJ) and High Energy Accelerator Research Organization (KEK). KAGRA completed its construction in 2019, and later joined the international gravitational-wave network of LIGO and Virgo. The actual data-taking was started in February 2020 during the final stage of the run called “O3b.” The KAGRA collaboration is composed of over 470 members from 11 countries/regions. The list of researchers is available from http://gwwiki.icrr.u-tokyo.ac.jp/JGWwiki/KAGRA/KSC/Researchers. KAGRA information is at the website https://gwcenter.icrr.u-tokyo.ac.jp/en/

Image: Graphical table of all gravitational wave events discovered from 2015 through the end of LIGO/Virgo’s third observing run. The table includes the gravitational event name, the type of binary component (black hole, neutron star, or uncertain), the masses of the primary and secondary, and the mass of the final merged object. See also a large size version of the file (19MB) suitable for poster printing, as well as a black-background version. Credit: LIGO/Virgo/KAGRA/C. Knox/H. Middleton.