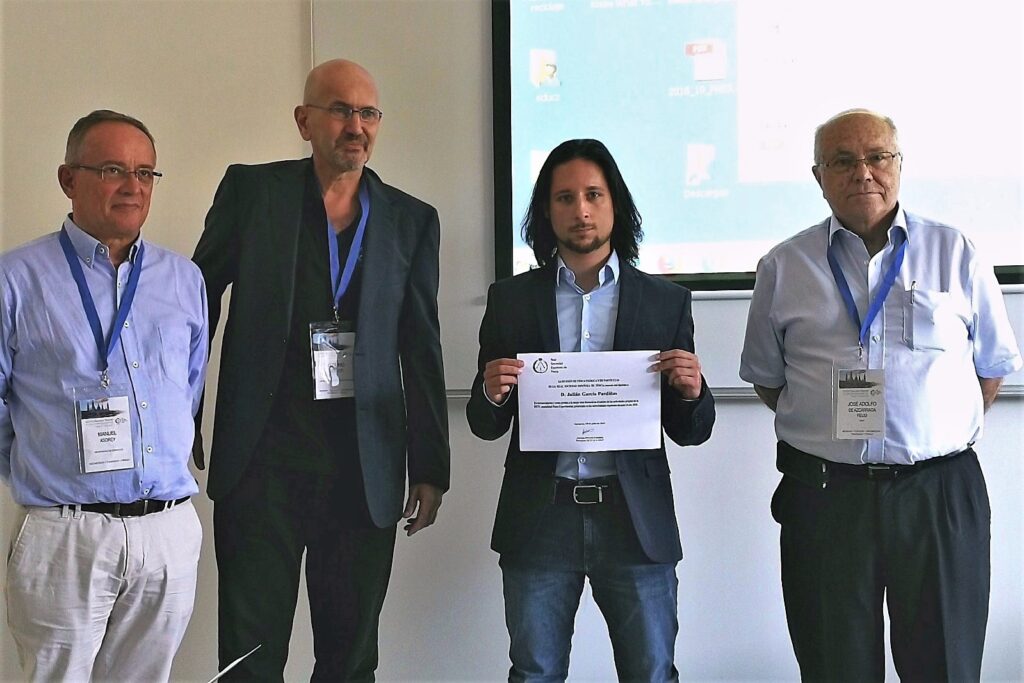 Postdoctoral researcher Julián García Pardiñas was awarded last Thursday the 1st DFTP Prize (Division of Theoretical and Particle Physics) of the Royal Spanish Society of Physics (RSEF), in the modality “Best PhD thesis in Experimental Physics”, for his work developed at the Galician Institute for High Energy Physics (IGFAE) of the University of Santiago (USC). This recognition, given in the framework of the XXXVII Biennial Meeting of the RSEF held last week in Zaragoza distinguish the most outstanding works defended in Spanish universities during 2018, adds to the brilliant career of this young researcher.

Award of academic excellence of the Xunta de Galicia before starting university, best record of its promotion, of the entire Galician university system in the degree of Physics, and in the Master’s Degree in Nuclear Physics and Particles and its Technological and Medical Applications of the USC. Now, after completing his PhD thesis at the IGFAE and the USC with a FPU grant from the Ministry of Science, Innovation and Universities which included stays at CERN, Julián García Pardiñas received another new recognition yesterday: the award for the best PhD thesis in Experimental Physics of the Division of Theoretical and Particle Physics (DFTP) of the Royal Spanish Society of Physics (RSEF).

At the award ceremony held at the XXXVIII Biennial Meeting of the RSEF, DFTP President Antonio Dobado González, and RSEF President José Adolfo de Azcárraga Feliu, praised the quality of the work presented by this young researcher and highlighted that this new award aims to be an incentive for doctoral students in this field.

B mesons flavor analysis of with LHCb

The Standard Model (ME) of Particle Physics is a successful theory that explains how the particles that make up matter interact, governed by the elemental forces of nature: weak nuclear force, strong nuclear force and electromagnetism. However, the ME has important issues unresolved. One of the questions is the so-called flavor structure, a property of the fermions -quarks and leptons- that determines their organization into three categories and how they are related. Several models of New Physics (NF) predict modifications in the flavor structure and deviations from what was expected in certain subatomic processes. Julián’s PhD thesis, supervised by IGFAE researchers and USC Professors Máximo Pló and Juan José Saborido, sought to test this property using measurements from CERN’s LHCb experiment. There protons collide at speeds close to those of light with the aim to observe the mesons B decay and find evidence of the new physics capable of giving the missing answers, for example, about the observed asymmetry between matter and antimatter.

The main challenges of the dissertation were to carry out successfully a new type of very complex measure and two very different analysis. In the result of the first analysis, related to this asymmetry between matter and antimatter, no significant deviations were found with respect to those of the Standard Model, but new tools were developed, such as the data processing in  GPUs that will be used for future LHCb analysis. In relation to the second analysis, which focuses on the so-called favlor anomalies between tauons and muons, the basis for this type of measure was set, preliminary results were obtained and the plan to make the final measure in the future was designed. Currently, Julián is a postdoctoral researcher at the University of Zürich thanks to a collaboration that began during this stage.