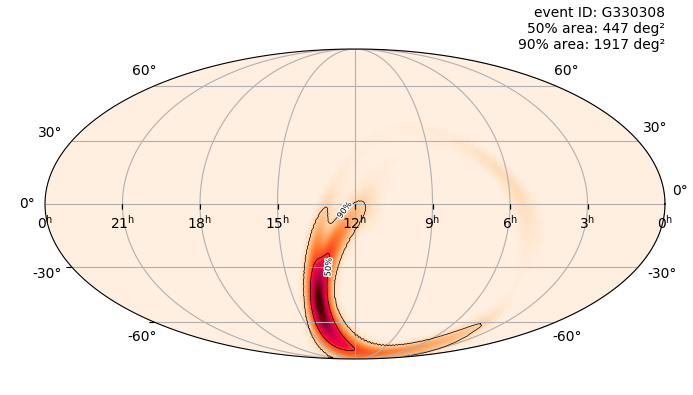 The LIGO and Virgo detectors resumed their hunt for gravitational waves on April 1 with the new Observing run, O3. Since then the European Virgo detector, based in Italy at the European Gravitational Observatory (EGO), and the NSF-funded LIGO twin detectors, located in the states of Washington and Louisiana (USA) have been taking data, becoming together the most sensitive gravitational wave observatory to date. During the O3 run, lasting 1 year, the three detectors will operate as a global observatory.

Since August 2017, the end of the second observation run O2, the two collaborations have intensively worked on their interferometers to improve sensitivity and reliability, achieving significantly greater improvements to the LIGO detectors’ current sensitivity than from O1 to O2. Detector sensitivity is commonly given in terms of the maximum distance from which it could observe the merger of a binary neutron star system. For instance, during O2 Advanced Virgo could observe such systems up to a distance of 88 million light years; Virgo sensitivity in O3 has boosted this distance by a factor of 2 over O2.

Squeezed vacuum states are now injected into Advanced Virgo, thanks also to a collaboration with the Albert Einstein Institute in Hannover, Germany. This technique takes advantage of the quantum nature of light and improves the sensitivity at high frequencies. Squeezing is a major upgrade also implemented in the two LIGO interferometers in the US for this next observation run. Moreover, the laser power has been doubled to more precisely measure the effect of passing gravitational waves. Other upgrades were made to LIGO’s mirrors at both locations, with a total of five of eight mirrors being swapped out for better-performing versions.

In 2015, after LIGO began observing for the first time in an upgraded program called Advanced LIGO, it soon made history by making the first direct detection of gravitational waves. The ripples traveled to Earth from a pair of colliding black holes located 1.3 billion light-years away — a discovery which led to the award of the 2017 Nobel Prize in Physics.

Since then, the LIGO-Virgo detector network has uncovered nine additional black hole mergers and one explosive collision of two neutron stars. That event, GW170817, generated not just gravitational waves but light, observed by dozens of telescopes in space and on the ground, including radio and X-ray and gamma-ray emissions.

The scientific outcome of O3 is expected to be tremendous, potentially revealing exciting signals coming from new sources such as the merger of mixed binaries made by a black hole and a neutron star. Scientists also expect to possibly observe several binary neutron star mergers, following the detection of GW170817 which opened the era of multi-messenger GW astronomy and provided insights into binary evolution, nuclear physics, cosmology and fundamental physics. Furthermore, thanks to the upgrades of Virgo and LIGO, signals for the merger of binary black holes, such as GW150914, the first gravitational-wave event detected, are expected to become quite common, up to one per week; observations of so many signals will give us a census of the population of stellar mass remnants and a better understanding of the violent universe.

Scientists have improved their offline and online data analysis and developed further the procedures for releasing Open Public Alerts: these will within minutes notify the physics and astronomy community when a potential gravitational-wave event is observed, to follow up the gravitational wave signal with neutrino and/or electromagnetic searches.

Since the beginning of O3 on April 1, three public alerts for gravitational-wave candidate events have already been issued. For each of these, LIGO-Virgo collaborations provide an estimate of the sky location and distance of the source, assuming it is of astrophysical origin. The most recent of these events, observed on April 21, is consistent with a massive binary black hole merger at an estimated distance of 2.3 gigaparsecs – nearly 7 billion light years!

The Japanese detector KAGRA is expected to join the global LIGO-Virgo network in the last part of O3, extending the detection and pointing capabilities of the global network.

Five groups in Spain are contributing to LIGO-Virgo gravitational wave astronomy, in areas that range from theoretical modelling of the astrophysical sources to improving the detector’s sensitivity for current and future runs. Two groups, in UIB and IGFAE-USC, are within the LIGO Scientific Collaboration, while University of Valencia (UV), ICCUB and IFAE are Virgo members.

The IGFAE Gravitational Wave group at the University of Santiago de Compostela is the ‘youngest’ LIGO member group in Spain, but has significant expertise with analysis methods to detect gravitational-wave signals from inspiralling binary systems of black holes and neutron stars, like the 11 events so far catalogued by LIGO-Virgo. IGFAE-GW is currently significantly upgrading the PyCBC detection pipeline to maximize the reach of binary searches in the new O3 network. The ‘low latency’ online PyCBC search has already participated in identifying the 3 public gravitational-wave candidates seen so far in O3.

Group members working with the Pierre Auger cosmic ray observatory have previously co-authored with LIGO and Virgo to put the most stringent bounds on emission of ultra-high energy neutrinos from the binary neutron star merger GW170817, and will be continuing to work on multi-messenger followup of O3 events.