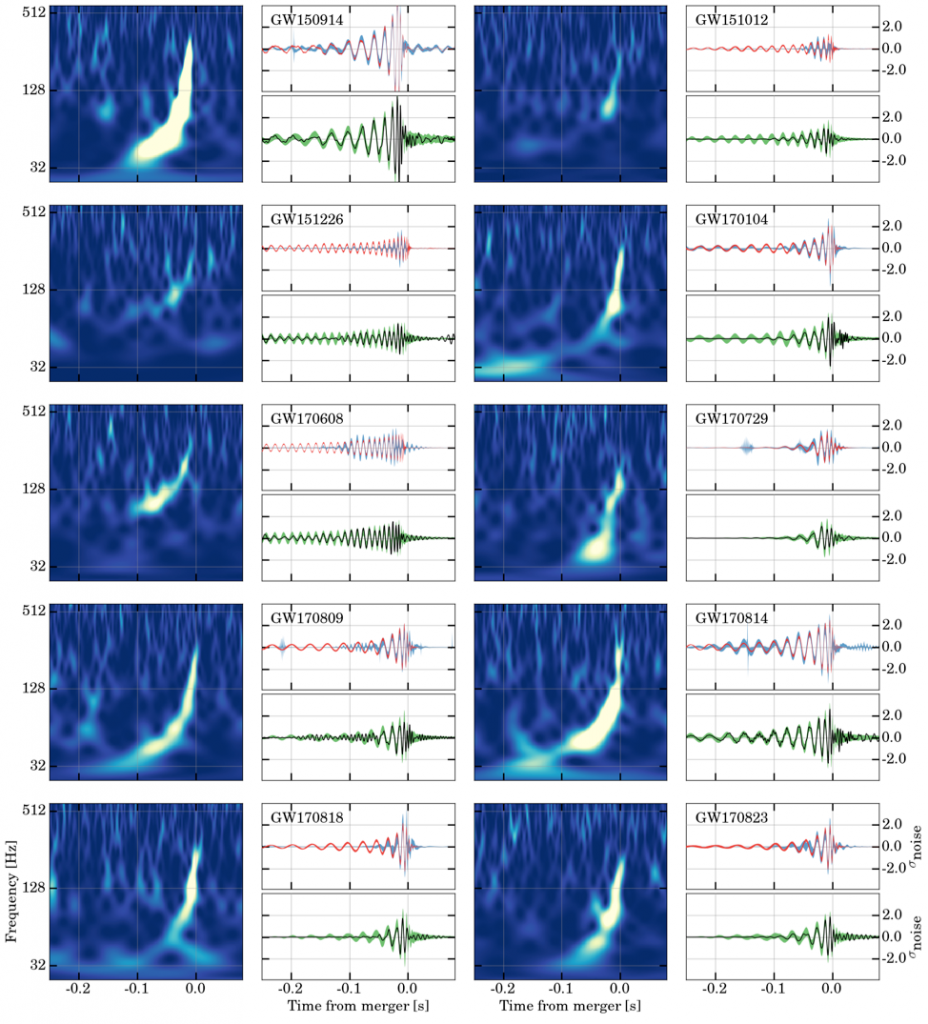 On Saturday, December 1, scientists attending the Gravitational Wave Physics and Astronomy Workshop in College Park, Maryland, presented new results from the National Science Foundation’s LIGO (Laser Interferometer Gravitational-Wave Observatory) and the European-based VIRGO gravitational-wave detector regarding their searches for coalescing cosmic objects, such as pairs of black holes and pairs of neutron stars. The LIGO and Virgo collaborations have now confidently detected gravitational waves from a total of 10 stellar-mass binary black hole mergers (see Figure below) and one merger of neutron stars, which are the dense, spherical remains of stellar explosions. Six of the black hole merger events had been reported before, while four are newly announced.

From September 12, 2015, to January 19, 2016, during the first LIGO observing run since undergoing upgrades in a program called Advanced LIGO, gravitational waves from three binary black hole mergers were detected. The second observing run, which lasted from November 30, 2016, to August 25, 2017, yielded one binary neutron star merger and seven additional binary black hole mergers, including the four new gravitational-wave events being reported now. The new events are known as GW170729, GW170809, GW170818, and GW170823, in reference to the dates they were detected.

All of the events are included in a new catalog, also released Saturday, with some of the events breaking records. For instance, the new event GW170729, detected in the second observing run on July 29, 2017, is the most massive and distant gravitational-wave source ever observed. In this coalescence, which happened roughly 5 billion years ago, an equivalent energy of almost five solar masses was converted into gravitational radiation.

GW170814 was the first binary black hole merger measured by the three-detector network, and allowed for the first tests of gravitational-wave polarization (analogous to light polarization).

The event GW170817, detected three days after GW170814, represented the first time that gravitational waves were ever observed from the merger of a binary neutron star system. What’s more, this collision was seen in gravitational waves and light, marking an exciting new chapter in multi-messenger astronomy, in which cosmic objects are observed simultaneously in different forms of radiation.

One of the new events, GW170818, which was detected by the global network formed by the LIGO and Virgo observatories, was very precisely pinpointed in the sky. The position of the binary black holes, located 2.5 billion light-years from Earth, was identified in the sky with a precision of 39 square degrees. That makes it the next best localized gravitational-wave source after the GW170817 neutron star merger.

Results made public on the arXiv

The scientific papers describing these new findings, which are being initially published on the arXiv repository of electronic preprints, present detailed information in the form of a catalog of all the gravitational wave detections and candidate events of the two observing runs as well as describing the characteristics of the merging black hole population. Most notably, we find that almost all black holes formed from stars are lighter than 45 times the mass of the Sun. Thanks to more advanced data processing and better calibration of the instruments, the accuracy of the astrophysical parameters of the previously announced events increased notably.

The Instituto Galego de Fisica de Altas Enerxias (IGFAE) started a new research group in gravitational wave data analysis headed by Dr Thomas Dent in October 2018, and joined the LIGO collaboration shortly afterwards.  Dr. Dent is one of the key developers of one of the analysis pipelines which identified these events in LIGO/Virgo data. IGFAE’s recent contributions to preparing these astrophysical results for publication include studies on GW170729, the most massive and distant black hole merger so far detected, and checking the intriguing finding that black holes seen in such mergers have an apparent limit on their mass of about 45 times the mass of the Sun.

Comments from LIGO and Virgo leadership

Caltech’s Albert Lazzarini, Deputy Director of the LIGO Laboratory, says “The release of four additional binary black hole mergers further informs us of the nature of the population of these binary systems in the universe and better constrains the event rate for these types of events.”

“In just one year, LIGO and VIRGO working together have dramatically advanced gravitational-wave science, and the rate of discovery suggests the most spectacular findings are yet to come,” says Denise Caldwell, Director of NSF’s Division of Physics. “The accomplishments of NSF’s LIGO and its international partners are a source of pride for the agency, and we expect even greater advances as LIGO’s sensitivity becomes better and better in the coming year.”

“The next observing run, starting in Spring 2019, should yield many more gravitational-wave candidates, and the science the community can accomplish will grow accordingly,” says David Shoemaker, spokesperson for the LIGO Scientific Collaboration and senior research scientist in MIT’s Kavli Institute for Astrophysics and Space Research. “It’s an incredibly exciting time.”

“It is gratifying to see the new capabilities that become available through the addition of Advanced Virgo to the global network,” says Jo van den Brand of Nikhef (the Dutch National Institute for Subatomic Physics) and VU University Amsterdam, who is the spokesperson for the Virgo Collaboration. “Our greatly improved pointing precision will allow astronomers to rapidly find any other cosmic messengers emitted by the gravitational-wave sources.” The enhanced pointing capability of the LIGO-Virgo network is made possible by exploiting the time delays of the signal arrival at the different sites and the so-called antenna patterns of the interferometers.

“The new catalog is another proof of the exemplary international collaboration of the gravitational wave community and an asset for the forthcoming runs and upgrades” adds EGO Director Stavros Katsanevas.

Laura Cadonati, Deputy Spokesperson for the LIGO Scientific Collaboration, says “These new discoveries were only made possible through the tireless and carefully coordinated work of the detector commissioners at all three  observatories, and the scientists around the world responsible for data quality and cleaning, searching for buried signals, and parameter estimation for each candidate — each a scientific specialty requiring enormous expertise and experience.”

LIGO is funded by NSF and operated by Caltech and MIT, which conceived of LIGO and led the Initial and Advanced LIGO projects. Financial support for the Advanced LIGO project was led by the NSF with Germany (Max Planck Society), the U.K. (Science and Technology Facilities Council) and Australia (Australian Research Council-OzGrav) making significant commitments and contributions to the project. More than 1,200 scientists from around the world participate in the effort through the LIGO Scientific Collaboration, which includes the GEO Collaboration. A list of additional partners is available at https://my.ligo.org/census.php.

The Virgo collaboration consists of more than 300 physicists and engineers belonging to 28 different European research groups: six from Centre National de la Recherche Scientifique (CNRS) in France; 11 from the Istituto Nazionale di Fisica Nucleare (INFN) in Italy; two in the Netherlands with Nikhef; the MTA Wigner RCP in Hungary; the POLGRAW group in Poland; Spain with IFAE and the Universities of Valencia and Barcelona; two in Belgium with the Universities of Liege and Louvain; Jena University in Germany; and the European Gravitational Observatory (EGO), the laboratory hosting the Virgo detector near Pisa in Italy, funded by CNRS, INFN, and Nikhef. A list of the Virgo Collaboration can be found at http://public.virgo-gw.eu/the-virgo-collaboration/. More information is available on the Virgo website at www.virgo-gw.eu.

Paper: “GWTC-1: A Gravitational-Wave Transient Catalog of Compact Binary Mergers Observed by LIGO and Virgo during the First and Second Observing Runs” https://arxiv.org/abs/1811.12907 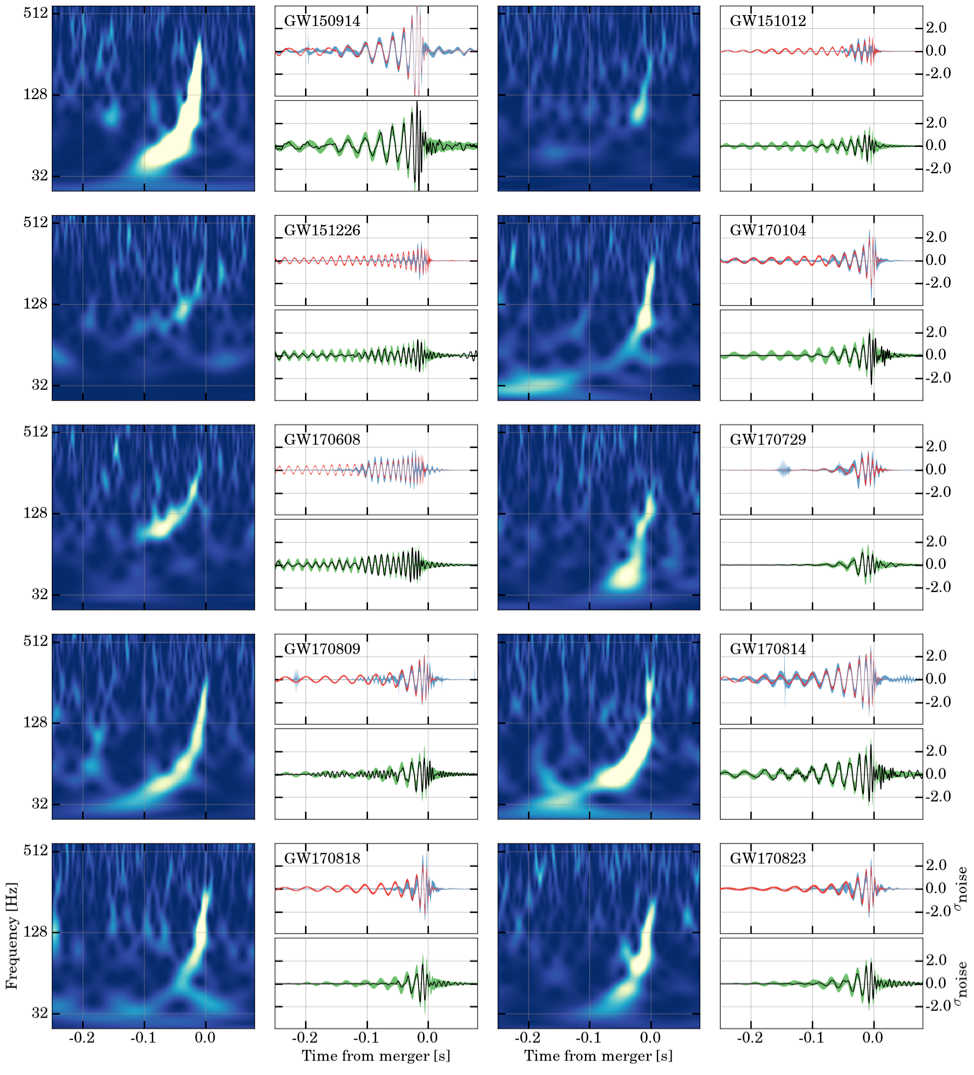